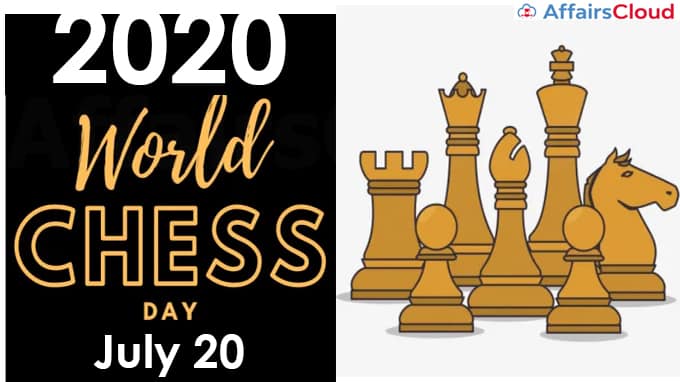 United Nations’(UN) First World Chess Day is celebrated on 20th July, 2020 all over the world to acknowledge the importance of chess in building harmony among countries, breaking the racial, political and social barriers and its role in achieving the 2030 Agenda for sustainable development and sustainable development goals(SDG). This day also marks the 96th Anniversary of the International Chess Federation (FIDE – Fédération Internationale des Échecs).

ii.The United Nation General Assembly(UNGA), passed a resolution on 12th December 2019, proclaiming 20th July as World Chess day to recognise the importance of FIDE in supporting international cooperation in activities related to Chess. The resolution was proposed by Armenia and co-sponsored by other 52 countries.

i.The modern chess is believed to be derived from the ancient board game “Chaturanga” originated in North India during the Gupta Period – 319 – 543 (Common Era)CE, which means four divisions- infantry, cavalry, elephantry and chariotry which became the pawns, knight, bishop and rook.

ii.The earliest references of chess are from the persian manuscripts from around 600 CE.

Effects of Covid on Sports:

i.The COVID-19 pandemic resulting in social and physical distancing and lockdown of schools and other institutes have disrupted sports and other activities.

ii.The recommendation for the governments, UN systems and other stakeholders to support the safe reopening of the sports events and others are made.

It is reported that the overall interest in chess has doubled in the past few months, with more players participating in the chess events over the online platforms.