On January 27, 2020 agriculture post-harvest management company- National Collateral Management Services Limited (NCML) has released its 1st estimate of for 2019-20 rabi crop production. The year 2020 is expected to make record food grain production led by the wheat crop along with corn and jowar while Oilseeds and pulses may have lower production. 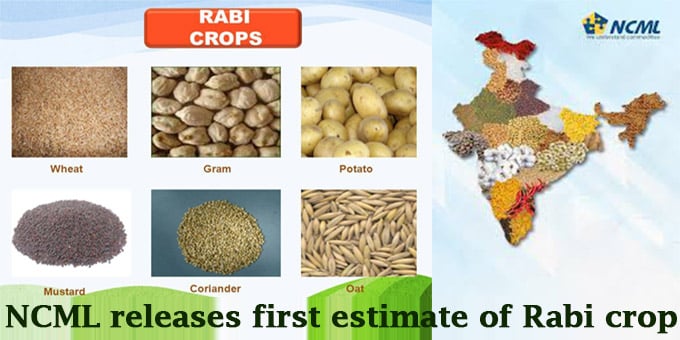 1st estimate of rabi crop by NCML:
Rabi season: This season which contributes 50% of foodgrain production usually starts from the month of November and lasts till the following year’s April month. The Rabi paddy production is also estimated to increase by 5% further.

i.Wheat Production: Wheat being the main crop of the Rabi season saw a total production of estimated at 1090 lakh tonnes for 2019-20 which is 6.27% higher than 2018-19 production (1021 lakh tonnes). The production is also expected to increase further due to Minimum Support Price’s (MSP’s) increase.

ii.Maize production: Apart from paddy and wheat, in India, Maize is the third largest cereal crop of Rabi season. The maize production during 2019-20 was estimated to be 89.2 lakh tonnes and was higher by 8.25% from 2018-19.

Pulse production:
The pulse production may show marginal decline by 2% from its previous year production. Indian Rabi pulses production for the year 2019-20 is estimated at 144.8 lakh tonnes as against 148 Lakh tonnes witnessed during 2018-19.

i.Gram: Among all the rabi crops, Gram has the highest acreage (land area). For the current season 2019-21 the gram production is estimated to be lower by 5% at 95.82lakh tonnes from previous production of 101.3 lakh tonnes.

iii.Mustard production: Production of Mustard is estimated at 85.79 lakh tonnes for 2019-20 which is lower by 8.8% as against last year’s production of 93.4 lakh tonnes. The oilseed is primarily grown in the states of Rajasthan, Uttar Pradesh, Madhya Pradesh and Haryana.