19th Indo – Swedish Joint Commission for Economic, Industrial and Scientific Cooperation (JCEC) for 2019 between India and Sweden was held in Stockholm, Sweden on October 22- 23, 2019. It was co-chaired by Ms. Anna Hallberg, Minister of Foreign Trade, Government of the Kingdom of Sweden and Piyush Goyal, Commerce and Industry Minister, Government of India. 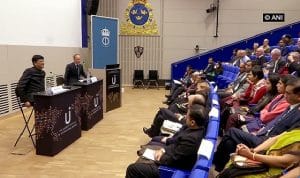 Key Points:
i. Commerce and Industry & Railways Minister, Piyush Goyal was accompanied by an Indian business delegation to promote bilateral cooperation between the businesses of both countries.
ii. He highlighted the potential of the Indo – Swedish partnership under the Memorandum of Understanding (MoU) in innovation, energy, healthcare, defence, Sustainable Urban Development and railways.
iii. He proposed the setting up of an Investment Enclave for Swedish investors in India.
iv. New areas of collaboration were identified like electromobility, road safety, space research and traditional Indian medicine (Ayurveda, naturopathy).
v.Swedish Business Communities were invited to partner with Indian Industries.
vi.JCEC is a roadmap to take Indo-Swedish Economic, Industrial and Scientific Cooperation to a higher level.
vii. The India-Sweden Business Leaders Round Table (ISBLRT), was an important outcome of the Swedish Prime Minister, Mr. Stefan Lofven’s last visit to India in 2016.