On October 23, 2019, Union Minister for Panchayati Raj Mr Narendra Singh Tomar conferred National Panchayat Awards 2019 in New Delhi to 240 panchayats out of the 2.5 lakh panchayats of India. The Panchayati Raj Ministers from states of Karnataka, Chattisgarh, Assam and Tamil Nadu along with representatives of Panchayati Raj Institutions across the country took part in the award ceremony. 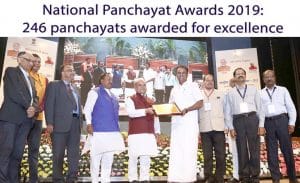 Key Points:
i.The Minister launched a Spatial Planning Application called ‘Gram Manchitra’ which is a Geo Spatial based decision support system for the panchayats.
ii.The Awards were given under the following categories: