On February 23, 2020, According to “Transforming Nutrition in India: Poshan Abhiyan”, a 2nd progress report on Prime Minister’s Overarching Scheme for Holistic Nourishment (POSHAN) Abhiyaan (Nutrition Mission) until September 2019, released by the NITI (National Institution for Transforming India) Aayog, worryingly 1 in 3 of Aadhaar-based payments for Centre’s maternity benefit scheme/ Pradhan Mantri Matru Vandana Yojana (PMMVY) was credited to a wrong bank account.
As per the report, 28% of 31.29 lakh of all Aadhaar-based payments are going to different bank accounts than what had been provided by the beneficiaries. 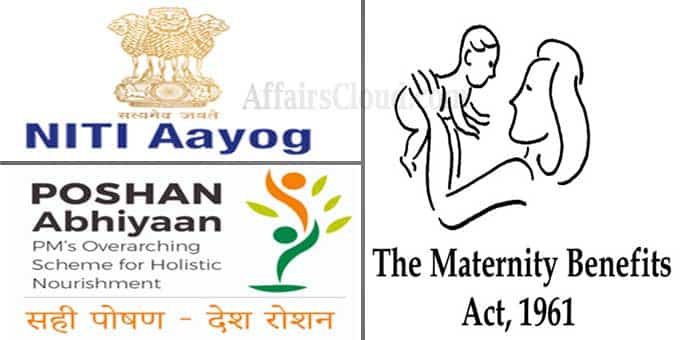 i.As per the data gathered until March 31, 2019, the report notes that 66% of the direct benefit transfers for the PMMVY were based on Aadhaar.

ii.According to a telephone survey of 5,525 beneficiaries, undertaken by the Ministry of Women and Child Development (WCD), showed that just 60% of beneficiaries  under the scheme were aware of the receipt of the benefits and the bank accounts to which the money was remitted.

iii.Background: There have been records of long term delays with some beneficiaries having to wait for 2 years period to get the benefit. They also facing problems in filling up the 32-page application form and providing nine identity documents.

iv.Ranking of the states:
The report also ranked states & Union Territories to measure their readiness to execute the programme across 4 themes: governance and institutional mechanism; strategy and planning; service delivery and capacities; and programme activities and intervention coverage. The States were classified into large and small categories for a better comparison.

Among the 19 large States, Andhra Pradesh, Chhattisgarh and Madhya Pradesh scored the top 3 ranks with the scheme implementation score of over 70%. While, Among the 8 small States, Mizoram and Sikkim scored above 75%. Similarly, Dadra and Nagar Haveli, Chandigarh, and Daman and Diu scored above 75% & got top 3 spot among 7 Union Territories list.

v.Way forward: The report stressed  to simplify the documentation and operational rules to avoid delays in money transfer & also proposed to rationalize the mandatory waiting period of 180 days before the second installment is released as well as the compulsory birth certificate for the release of the 3rd installment.

About PMMVY:
It is a maternity benefit programme being implemented in all districts of the country with effect from 1st January, 2017.

Under this, pregnant women and lactating mothers get ₹5,000 for their 1st  child in 3 instalments (of Rs1,000, Rs2,000 and Rs2,000) on fulfilling some conditions including early registration of pregnancy, Ante-natal check-up, and Registration of the birth of the child and completion of first cycle of vaccination for the first living child of the family.

The amount is meant to compensate women for the loss of wages and is aimed at ensuring a healthy nutritional development of the newborn baby.