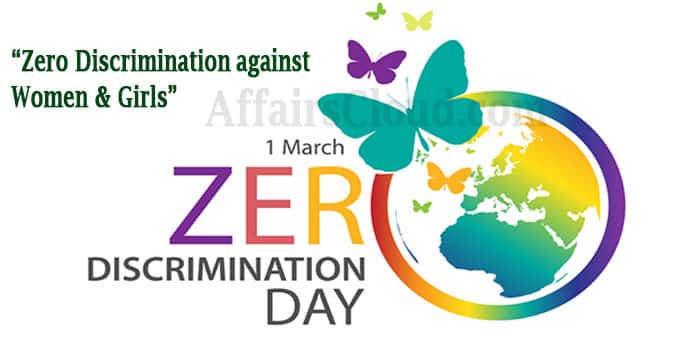 Objective of Zero Discrimination Day
The day is observed to ensure zero discrimination against women & girls & to promote the necessity of equal rights , opportunities & treatments.

Significance of Zero Discrimination Day
According to Joint United Nations Programme on HIV/AIDS (UNAIDS), at least 1 in 3 women & girls have experienced violence in their lives, with adolescent girls experiencing higher rates of intimate partner violence than adult women overall. In some countries more than 50% of women have reported violence in the past 12 months.

ii.On one side many countries’ laws discriminate against women & girls, & on the other side, laws which must uphold women’s basic rights & protect them from harm & unequal treatment are far away from norm.

iii.In addition to this, inequality in domestic work, property & inheritance rights add up their burdens.

iv.Violence against women is deeply rooted in gender inequalities & is used as a tool for male to control over women.

Changes needed
Equal Participation in Political life, to uphold Human rights & laws that empower, to guarantee economic justice, to end gender based violence,to provide health care without stigma or barriers,to give free primary and secondary education to all & to fight for climate justice.

Background
UNAIDS Executive Director Michel Sidibe launched this day & since then it is celebrated on March 1 for the right of everyone to live a full & productive life with dignity.It was first celebrated in the year 2014.The day highlights to promote compassionate & peaceful environment & to create a global movement to end all forms of discrimination.