The 1st edition of the 2020 Khelo India University Games (KIUG) was held from February 22 – March 1, 2020 at KIIT University (Kalinga Institute of Industrial Technology University) in Bhubaneswar,Odisha.
The tournament, inaugurated by Prime Minister(PM)  Narendra Modi,held with the official mascots of ‘Jay and Bijay’. 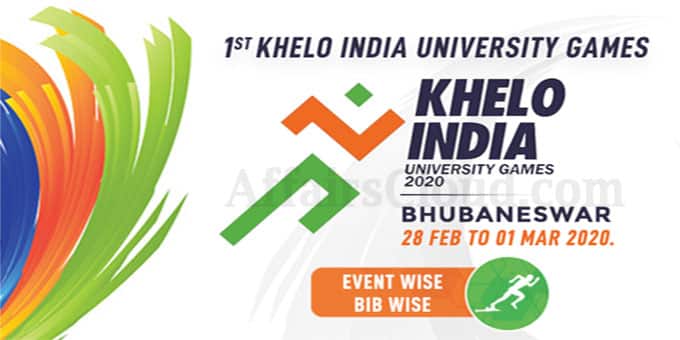 ii.The University of Mumbai’s twin-sisters Jyoti & Aarti have clichéd 4 medals at the KIUG by ended up on the podium in the 200m breaststroke, where Jyoti winning a gold and Aarti a bronze medal.They also bagged a bronze in the 4x200m freestyle relay.

iii.Indian professional sprinter, Dutee Chand, who is representing Kalinga Institute of Industrial Technology, clinched the 200m gold medal with a timing of 23.66 seconds.

Khelo India program:
This program was introduced to revive sports culture in India by merging Rajiv Gandhi Khel Ahiyan (erstwhile Yuva Krida and Khel Abhiyan), ‘Urban Sports Infrastructure scheme’ and National Sports Talent Search System Program as a central sector scheme.
Through this program, talented players will be identified in priority sports disciplines and will be provided annual financial assistance of Rs.5 lakh per annum for a period of 8 years.