The World Wrestling Championships 2019 was held at Barys Arena in Nur-Sultan, Kazakhstan from September 14-22, 2019. It was organized by the United World Wrestling (UWW). It was a qualifying event for Tokyo 2020 Summer Olympics where the top 6 wrestlers from each category qualified for the event. 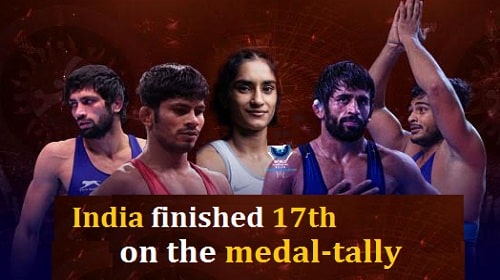 i. Deepak Punia became the fifth Indian to reach the final at the senior World Wrestling Championships. He clinched silver medal by defeating Stefan Reichmuth of Switzerland.
ii. Vinesh Phogat became the fifth Indian female wrestler to win the world award and it was her first World medal. She defeated Maria Prevolaraki of Greece to clinch bronze medal.
iii. Sushil Kumar is the India’s only world champion who had won a gold in the 66 kg in the 2010 World Championship in Moscow, Russia.
iv. Olympic Quota: Vinesh Phogat, Bajrang Punia, Deepak Punia and Ravi Kumar Dahiya qualified for 2020 Tokyo Summer Olympics. Vinesh Phogat became the first Indian wrestler to qualify for the 2020 Olympics.