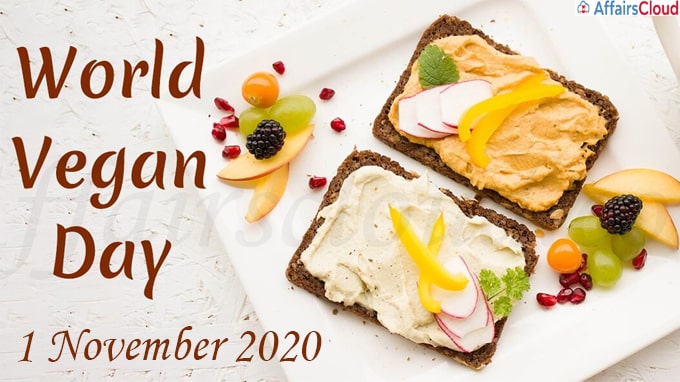 World Vegan Day is observed annually on November 1 all over the world to encourage people to follow a vegan lifestyle which is not only for the welfare of animals but also for an environment. It is celebrated by organizing a number of festivals and exhibitions by vegan societies.The 1st World Vegan Day was celebrated in the year 1994.

The term Vegan was coined by Donald Watson who founded The Vegan Society of UK in 1944. A vegan is a person who does not consume or use products derived from animals including dairy products like eggs milk, cheese, etc. A vegan diet contains only plant-based foods.

i.The United Nations'(UN) International Day of Charity is observed annually on September 5, to raise awareness about the role of charity to ease poverty and hunger. September 5 was chosen to commemorate the death anniversary of Mother Teresa of Calcutta (Saint Teresa of Calcutta, Mother Mary Teresa Bojaxhiu), who was the recipient of the Nobel Peace Prize in 1979.

ii.The United Nations'(UN) 1st International Day of Clean Air for Blue Skies is observed on September 7, 2020 across the world to emphasize the need for further efforts to improve air quality, including reducing air pollution, to protect human health.

About The Vegan Society: