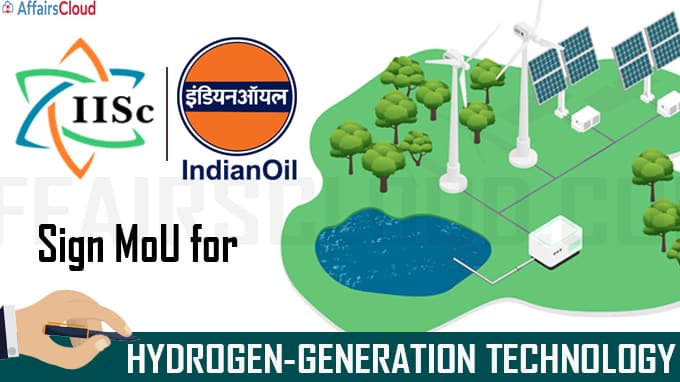 On October 29, 2020 Indian Institute of Science (IISc) and the Research and Development(R&D) Centre of IndianOil Corporation Limited(IOCL) signed a Memorandum of Understanding(MoU) to develop and demonstrate biomass gasification-based hydrogen generation technology to produce fuel cell-grade hydrogen at an economical price.

i.As per the MoU, IISc and IndianOil will work combinedly to optimize the biomass gasification and hydrogen purification processes.

ii.The developed technology will be improved and demonstrated at the R&D Centre of IndianOil at Faridabad, Haryana.

iii.As part of a bigger project conceived by IndianOil to usher in the hydrogen economy of India, the Hydrogen generated from this demonstration plant will be used to power fuel cell buses.

IOCL based on its patented single-step reforming technology has recently launched 50 buses in Delhi by using hydrogen-CNG(Compressed Natural Gas) as a fuel.

i.Biomass gasification based hydrogen production can produce  hydrogen with relatively low  carbon emissions when compared to other technologies.

ii.The hydrogen production technology based on biomass gasification developed by IISc comprises a process to produce  hydrogen-rich syngas from biomass and also to separate hydrogen from syngas.

iii.It has been demonstrated in a small-scale prototype at the IISc campus.

This initiative to produce fuel cell grade hydrogen from biomass is another step by IndianOil jointly with  IISc  to bring hydrogen fuel to the major energy matrix of India while using the agricultural forces of India.