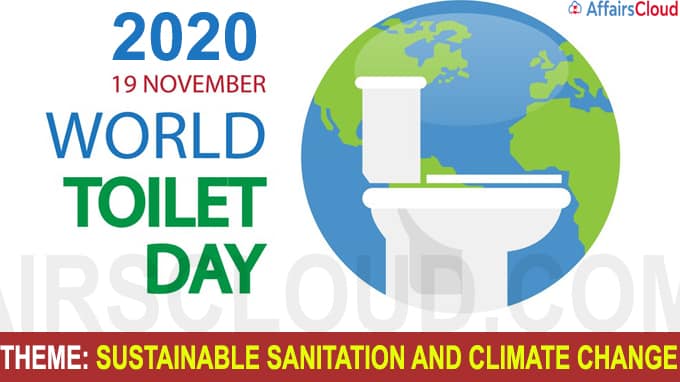 The theme of the 2020 World Toilet Day is “Sustainable sanitation and climate change”.

Every year the UN Water, the UN’s coordination mechanism on water and sanitation sets the theme of the World Toilet Day.

The World Toilet Day is about the action to tackle the global sanitation crisis and to achieve the Sustainable Development Goal(SDG) 6 – Water and Sanitation for all by 2030.

ii.The United Nations General Assembly(UNGA) adopted the resolution A/RES/67/291 on 24th July 2013, and proclaimed the 19th November of every year as the World Toilet Day starting from 2013.

The UN Water launched a global public campaign on www.worldtoiletday.org.

Message of the campaign:

Effects of Climate change on sanitation:

i.Climate change results in floods, drought and increasing sea level poses a great threat to the sanitation system from toilets to septic tanks to treatment plants across the globe.

ii.Sustainable sanitation facilities are a basic requirement for all the people to withstand climate change and maintain a healthy community.

i.More than 80% of waste water generated by the communities gets into the ecosystem without being treated or reused. These wastewaters and sludges from toilet contains valuable water, nutrients and energy,

i.More than 4.2 people do not have access to proper sanitation facilities, they utilise the unreliable inadequate toiles or practice open defecation.

Various organisations, governments, institutions and other stakeholders across the globe support the World Toilet day by organising various activities and events.

i.More than 40% of the global population which is around 3 billion people live without basic hand washing facilities.

ii.Annually around 297000 children under the age of 5 die from diarrhoeal disease caused due to poor hygiene, poor sanitation or unsafe drinking water.