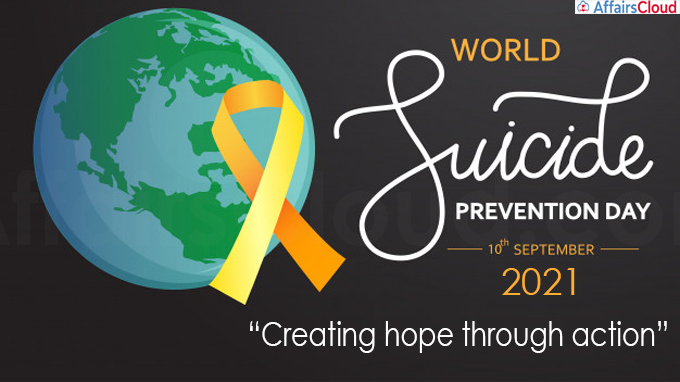 World Suicide Prevention Day(WSPD) is annually observed across the globe on September 10th to create awareness about suicide prevention across the world.  The day also aims to address self-harm and suicide through preventative action.

i.World Suicide Prevention Day is an initiative of the WHO and IASP created as an effort to make people socially aware of suicide prevention.

ii.The first-ever World Suicide Prevention day was hosted by the IASP in collaboration with WHO and the World Federation for Mental Health (WFMH) on 10th September 2003.

i.According to the WHO, annually around 70000 people across the globe die by suicide and suicide is the 4th leading cause of death in 15 to 29 year-olds

ii.Around 77% of the global suicides occur in low and middle-income countries.

iii.20% of global suicides are due to pesticide self-poisoning, most of which occur in rural agricultural areas in low- and middle-income countries.

i.WHO recognizes suicide as a public health priority and to create awareness WHO published the first WHO World Suicide report in 2014.

ii.Suicide is one of the priority conditions in the WHO Mental Health Gap Action Programme (mhGAP) launched in 2008.

iii.The members of WHO has committed to achieving the global target of reducing the suicide rate in countries by one third by 2030.

NCRB’s “Accident Deaths and Suicides in India in 2019”: Kerala Among top 5

i.According to the annual report of the National Crime Record Bureau(NCRB) titled “Accident Deaths and Suicides in India in 2019”, Andaman and Nicobar Islands has reported the highest rate of suicide (45.5) followed by Sikkim (33.1), Puducherry (32.5), Chhattisgarh (26.4) and Kerala (24.3).

ii.Kerala is among the top five States, Union Territory(UT) to report most suicides in 2019.