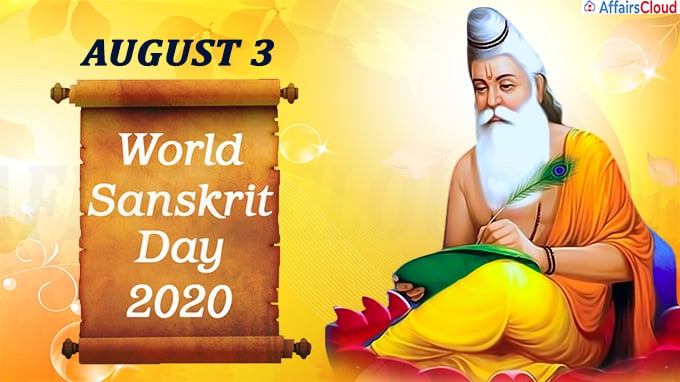 The World Sanskrit Day which is also known as Sanskrit Diwas or Vishvasamskritadinam is celebrated all over the world on the Shravana Poornima, full moon day of the Hindu month Shravana, the day promotes the revival of the ancient Indian language and speaks about the importance of learning and knowing Sanskrit Language.

To educate the younger generation about the history and significance of Sanskrit.

The Government of India declared to celebrate the world Sanskrit day on the Sharvana poornima, in 1969.

iii.The Central Sanskrit University at Delhi scheduled the celebrations and competitions for the Samskrita Week Celebration and these events will be organised as online events due to COVID-19 pandemic.

i.“Sudharma ”, the only Sanskrit newspaper in the world, has been published from Mysore, Karnataka since 1970.

ii.Sudharma is also available online, since Sanskrit is considered to be the most computer friendly language.

iii.The people of the Mattur village in the Shimoga district Karnataka preserved the language and everyone of the village speakers in ancient classical Sanskrit language.

iv.Samskrita Bharati, a nonprofit organisation is working on the revival of Sanskrit language, which was a Pan-India Language in the Vedic period.

English Philologist William Jones, in his book “The Sanscrit Language” (1786) mentioned that Greek and Latin were related to Sanskrit and have a common root.

ii.Vice President Venkaiah Naidu stated Sanksrti as the window of India’s grand cultural heritage and highlighted the importance of preserving and promoting the Sanskrit language which is associated with Vedas, Puranas to Upanishads.