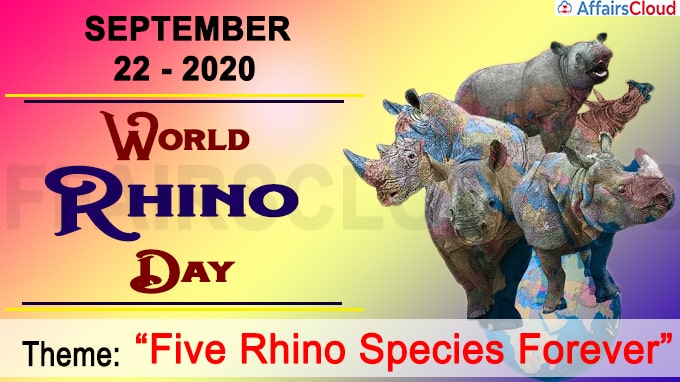 India is home to the largest number of Greater One-Horned Rhinoceros in the world with a population of 3000 Rhinoceros in Assam, West Bengal and Uttar Pradesh.

ii.The conservation initiatives for Rhino will also enrich the grassland management and will help in reducing the negative effects of climate change through Carbon Sequestration.

iii.It was the first of its kind for species in India to work for the conservation of species under five objectives which include strengthening protection, expanding distribution range, research and monitoring, and adequate and sustained funding.

iv.The one horned rhino was close to extinction with a population of less than 200 in the beginning of the 20th Century.

v.Rhinos are the only large mammal species in Asia to be down-listed from endangered too vulnerable in the International Union for Conservation of Nature (IUCN)’s of Nature, IUCN Red list in 2008.

i.It was launched in 2005 to attain a wild population of at least 3, 000 greater one-horned rhinos, spread over 7 protected areas in Assam by the year 2020.

i.In May, 2019, MoEFCC started a project to create DNA profiles of all rhinos in India.

ii.The project is expected to end in 2021, by which Indian rhino would be the first wild animal species in India to have all its member’s DNA-sequenced.

The project was supported by WWF-India and Wildlife Institute of India (WII).

iii.The DNA-sequencing will be useful in curbing poaching and for gathering evidence in wildlife crimes involving Rhinos.

The IUCN’s conservation status of the Five Rhino Species are