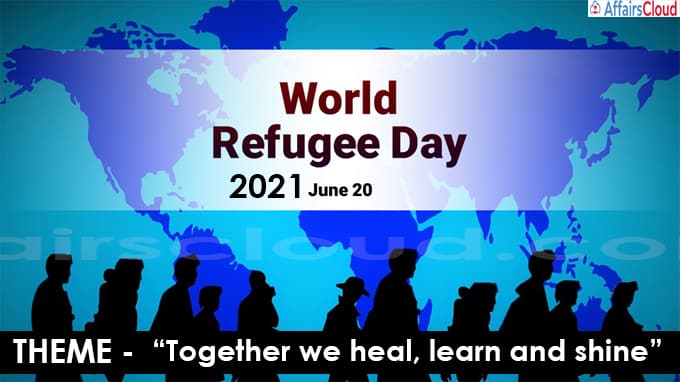 The United Nations(UN)’s World Refugee Day is annually observed across the globe on 20th June to support and protect the refugees across the globe and focus on the inclusion of refugees in Healthcare, education and sports.

The theme of World Refugee Day 2021 is “Together we heal, learn and shine”.

i.The United Nations General Assembly(UNGA) adopted the resolution A/RES/55/76 on 4th December 2000 and proclaimed the 20th June of every year as World Refugee Day from 2001.

ii.The Day was first observed on 20th June 2001 to commemorate the 50th Anniversary of the 1951 Convention relating to the Status of Refugees.

iii.Previously the day was observed as the Africa Refugee Day.

ii.These are the only global legal instruments that cover the important aspects of the refugee’s life.

iii.The 1951 Convention contains a number of rights and also highlights the obligations of refugees towards their host country.

The United Nations(UN)’s 1951 Refugee Convention and its 1967 Protocol helps to protect the refugees among the vulnerable people across the globe.

i.For every minute around 20 people leave everything behind including to escape war, persecution or terror.