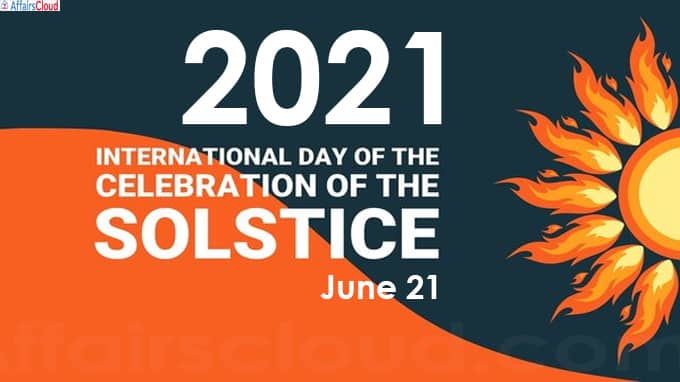 The United Nations(UN)’s International Day of the Celebration of the Solstice is annually observed across the globe on 21st June to create awareness about solstices and equinoxes and to highlight their significance in various religions and ethnic cultures.
June 21 is also known as “Summer Solstice”.

The United Nations General Assembly(UNGA) adopted the resolution A/RES/73/300 on 20th June 2019 and proclaimed the 21st June of every year as the International Day of the Celebration of the Solstice in its different manifestations.

The word Solstice is derived from Latin words ‘Sol’(sun), and ‘sistere’ (to stand still).
There are 2 solstices that occur every year,

i.Around June 21, commonly known as “Summer Solstice” which is the first day of summer and the longest day of the year. It occurs when the sun is directly over the Tropic of Cancer, or more specifically right over 23.5 degree north latitude.

ii.Around December 21, commonly known as “Winter Solstice” which is the first day of winter and the shortest day of the year.

The word Equinox is derived from Latin aequinoctium from aequus (equal) and nox (night).
Equinox is commonly known as the instant when the centre of the visible sun is directly above the Equator which occurs twice a year,

i.Around March 20, known as Spring Equinox which marks the beginning of spring

ii.Around September 23, known as Autumnal Equinox which marks the beginning of autumn.