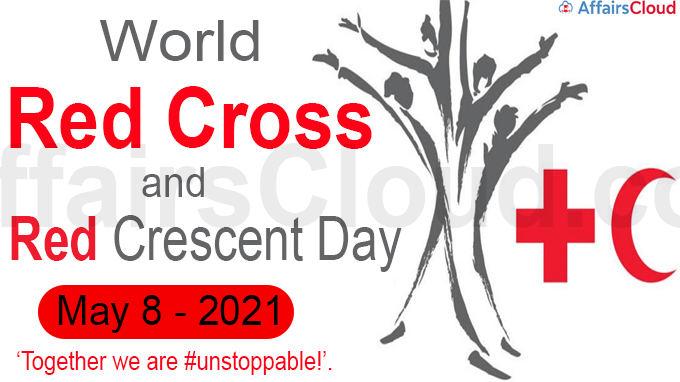 The World Red Cross and Red Crescent Day is annually observed across the globe on 8th May to celebrate and acknowledge the volunteers, members and staff who support the people in need. The day also commemorates the birth anniversary of Henry Dunant, the founder of the International Committee of the Red Cross(ICRC). He was born on 8th May 1828.

The theme of the World Red Cross and Red Crescent Day 2021 is ‘Together we are #unstoppable!’.

i.The annual celebration of World Red Cross day was proposed by the General Assembly of the International Federation of Red Cross and Red Crescent Societies (IFRC).

ii.The League of Red Cross Societies adopted the proposal and proclaimed 8th May of every year as the World Red Cross Day.

iii.The first Red Cross Day was celebrated on 8th May 1948.

After World War I, the IFRC was founded in 1919 in Paris, France.

The founding members of IFRC are Britain, France, Italy, Japan, and the United States of America(USA).

About International Committee of the Red Cross(ICRC):