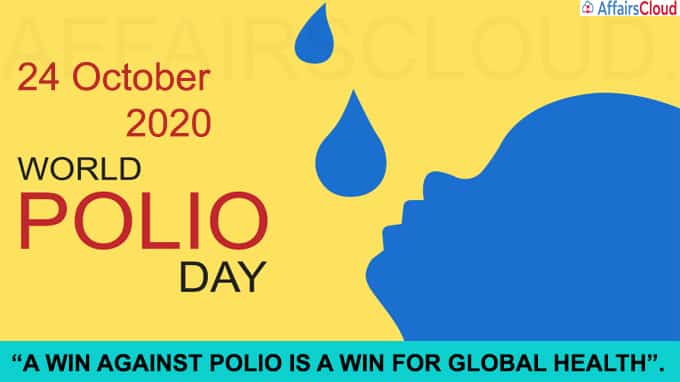 The theme of 2020 World Polio Day is “A win against polio is a win for global health”.

The Rotary International established the World Polio day on 24th October to commemorate the birth anniversary of Jonas Salk, the american virologist and medical researcher who led the first team to develop the vaccine against the poliomyelitis (commonly known as polio).

i.Poliomyelitis most known as the polio virus is a highly infectious disease that affects the children under the age of 5.

ii.The infection affects the nervous system of the child which can lead to paralysis.

ii.Polio does not have a cure but the polio vaccine is safe and effective which is used to immunize over 2.5 billion children.

i.The Global Polio Eradication Initiative (GPEI)was established in 1988 with a goal to eradicate polio and had reduced the 99% polio across the globe.

ii.The GPEI is a public private partnership(PPP) led by the national governments with 6 partners (World Health Organization (WHO), Rotary International, the US Centers for Disease Control and Prevention (CDC), the United Nations Children’s Fund (UNICEF), the Bill & Melinda Gates Foundation and Gavi, the Vaccine Alliance.)

iii.The WHO published the Polio Endgame strategy 2019-2023 eradication, integration, certification and containment on behalf of GPEI which features its efforts to eradicate polio.

ii.On 25th August 2020 WHO announced that Africa has stopped the transmission of the indigenous wild poliovirus. Whereas in Afghanistan and Pakistan the wild polio is still endemic.

iii.Along with the South-East Asia Region, India was officially declared as polio free in 2014.

India did not have any case of wild poliovirus since 2011.