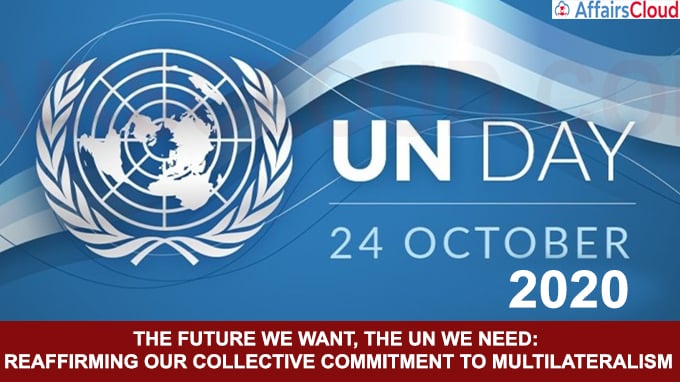 United Nations (UN) Day is held annually on October 24 since 1948 which marks the entry into force of the UN Charter in 1945. The year 2020 marks its 75th anniversary.During the high-level event of the 75th anniversary celebrations political declaration was adopted.The declaration was negotiated through an intergovernmental process under the theme “The future we want, the United Nations we need: reaffirming our collective commitment to multilateralism”.

Commemoration by Other Members:

–The UN Regional Information Centre for Western Europe (UNRIC) launched pan-European campaign “Turn Europe UN Blue” under which more than 250 iconic buildings from 150 cities and 21 countries will lit up blue – the official colour of the United Nations on October 24, 2020 to promote peace, sustainable development and human rights.

— India commemorates this day annually by raising the United Nations (UN) flag along with the tricolour atop all the significant buildings barring the Raj Bhawan and courts.

–The UN officially came into existence on 24 October 1945, after the end of World War II with an aim of preventing further wars.

–UN’s Charter had been ratified by China, France, the Soviet Union, the United Kingdom (UK), US and by a majority of other signatories.

–The name “United Nations” was coined by US President Franklin Delano Roosevelt.

i.UN International Day of the Victims of Enforced Disappearances is annually observed on 30th August to create and raise awareness that enforced disappearance is a crime and it should not be used like a tool to deal with the situations of conflicts.

ii.World Coconut Day is observed annually on September 2 to create awareness about the importance, usage of coconut and its benefits across the world.