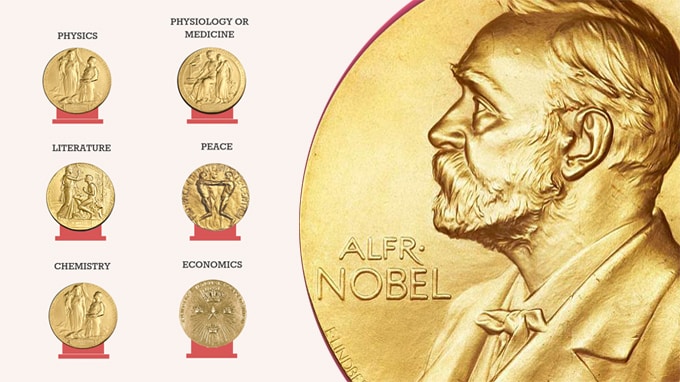 The Nobel Prize is one of the most prestigious awards which recognized the people who have conferred the greatest benefit to humankind according to Alfred Bernhard Nobel’s 1895 will. The Nobel prize was started in 1901 and the Nobel Memorial Prize in Economic Sciences, started in 1969.

Who is Alfred Bernhard Nobel? And His Notable Work?

Alfred Bernhard Nobel was born in Stockholm, Sweden in the year 1833. He was a famous chemist, engineer, inventor, scientist, businessman, philanthropist, and founder of the Nobel Prizes. His father was Immanuel Nobel and his mother was Andriette Ahlsell Nobel. He died in 1896.

In 1866, Alfred found that mixing nitroglycerine with a fine sand called kieselguhr , would turn the liquid into paste which could be shaped into rods. He named it “dynamite.” He also invented a detonator or blasting cap which could be set off by lighting a fuse. Together, these inventions helped reduce the cost of many construction work like drilling tunnels, blasting rocks, building bridges, etc.

On November 27, 1895, Alfred Bernhard Nobel signed one of his WILL to allocate his wealth for the establishment of a series of prizes in Physics, Chemistry, Physiology or Medicine, Literature and Peace. The prizes were awarded in his name.

Academies who Award the Nobel Prizes

As per Alfred Bernhard Nobel’s Will,

He specifically designated the institutions responsible for choosing laureates for each prize.

Prize in Economic Sciences in Memory of Alfred Nobel

The Nobel Laureates receive three things, namely,  a Nobel diploma, a Nobel Medal and a document confirming the Nobel Prize amount of 10 million Swedish kronor (more than USD 1.1 million).The medals are made of 18 carat recycled gold.

The term “Laureate” refers to being signified by the laurel wreath. In the Greek mythology, the god Apollo is represented wearing a laurel wreath on his head.

The Nobel Medals in Physics, Chemistry, Physiology or Medicine and Literature display the image of Alfred Nobel and the years of his birth and death (1833-1896). Nobel’s portrait also appears on the Nobel Peace Prize Medal and the Medal for the Prize in Economic Sciences, but with a slightly different design. The image in the reverse side of the medal varies according to the institution awarding the prize.

i.The Nobel Prizes have been presented to Nobel Laureates on 10 December, the anniversary of Alfred Nobel’s death, since 1901.

ii.Nobel Prizes in Physics, Chemistry, Physiology or Medicine and Literature are awarded in Stockholm, Sweden. The King of Sweden hands over the awards to all Nobel Laureates at the Blue Hall of the Stockholm City Hall since 1934.

iii.Nobel Peace Prize is awarded in Oslo, Norway. The Chairman of the Norwegian Nobel Committee hands over the awards in the presence of the King and Queen of Norway, the Norwegian government.

Quick view of Nobel Laureates from 1901

First Nobel Laureates in each category

i.Since the institution of the nobel prize in 1901, a total 49 prizes were not awarded. The award for Nobel prize in Economic Science has not been missed since 1969.

Only the Nobel Laureates in Physics, Chemistry, Physiology or Medicine, and Laureates in Economic Sciences are mentioned in the list by affiliation 1907-2017.

Malala Yousafzai, Pakistan  at the age of 17, won the Peace Prize in 2014 and became the youngest Nobel Laureates since 1901. She also is the First Pakistani Woman Nobel laureate.

i.John B. Goodenough, USA, at the age of 97 won the Nobel Prize in Chemistry in 2019 and became the oldest laureate to receive this award, since 1901.

i.The Nobel Prize and Prize in Economic Sciences have been awarded 57 times to women, between  1901 and 2020.

List of women who won 1st nobel prize in each category

i.Jean-Paul Sartre, France awarded the 1964 Nobel Prize in Literature, but he declined the prize as he had consistently declined all official honours.

ii.Le Duc Tho, Vietnam awarded the 1973 Nobel Peace Prize jointly with US Secretary of State, Henry Kissinger for negotiating the Vietnam peace accord, Le Duc Tho declined the award stating that the opposition has violated the truce.

Four Nobel Laureates who Forced to decline the Nobel Prize

ii.Boris Pasternak, Russia initially accepted the Nobel Prize in Literature 1958 but was later forced by the authorities of the Soviet Union, to decline the Nobel Prize.

i.At the  time of the award of the Nobel Prize, 3 nobel laureates were under arrest. ii.Notably, there were all Nobel Peace Prize Laureates.

iii.3 nobel laureates are as follows,

The following are the multiple times nobel laureates

i.Since 1974 ,The Statutes of the Nobel Foundation specified a nobel prize cannot be awarded posthumously unless death has occurred after the announcement of the Nobel Prize.

ii.Before 1974, nobel Prize has only been awarded posthumously twice, in 1931 Literature Prize awarded to Erik Axel Karlfeldt, and the 1961 Peace Prize awarded to UN Secretary General Dag Hammarskjöld due to certain circumstances.

iii.Mother Teresa won the Nobel Peace Prize in 1979 and became the 1st Indian citizen to bag this award. She became the 1st Asian woman Nobel laureate.

iv.Amartya Sen won Nobel Prize in Economic Sciences in 1998 and became the 1st Asian to have been honoured with the award.