25th April of every year is celebrated as World Penguin Day to create awareness about the threat to the existence of these flightless birds. The Antarctic and Southern Ocean Coalition (ASOC), a non governmental organisation mentions that this day coincides with the annual northern migration of Adelie penguins of Antarctica. 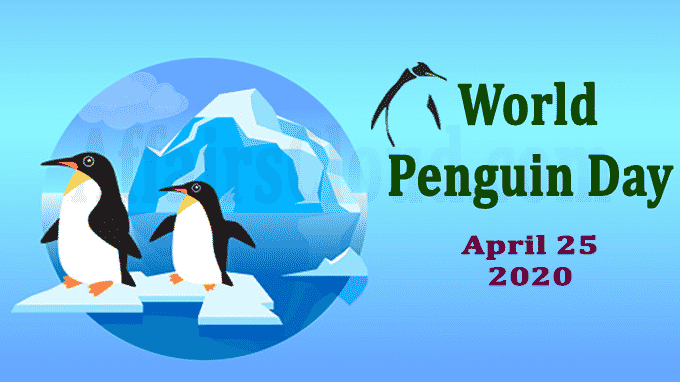 i.The ASCO worked with artist Vrinda Manglik to develop a story on the challenges faced by penguins in Antarctica.

ii.The day is celebrated by individuals and organisations by sharing the facts about the penguins and images and videos of penguins on social media.

iii.The Penguins including the African and Galapagos are decreasing in population and are becoming endangered because of accidentally being caught in the fishing nets.

iv.Over fishing, invasive species and climatic changes are the greatest threat to the penguins around the world.

i.Penguins stiff flippers sleek shape and webbed feet allow them to be great swimmers and hunt the krill, squid, and crabs in the underwater.They can swim about 15 miles an hour.

ii.Penguins lay eggs and raise their chicks in the shore and parents take turns in warming the eggs and parents creates unique audio frequency for the chicks to identify them in a large noisy crowd.

iii.Two-third of the penguin species are listed as threatened on the International Union for Conservation of Nature (IUCN) red list.