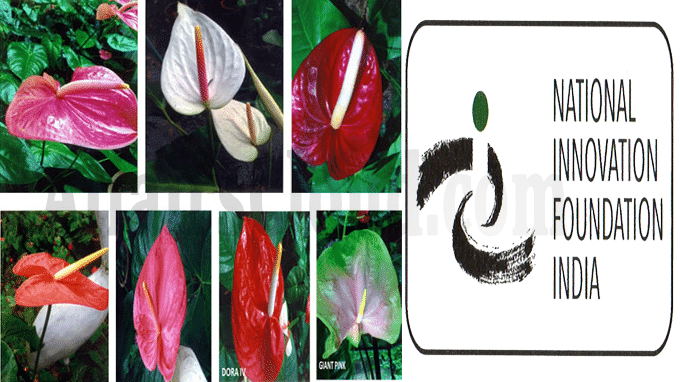 i.About Anthurium: Anthurium is one of the best domestic flowering plants in the world. They are beautiful but also purify the toxic substances from the air and remove harmful airborne chemicals like formaldehyde, ammonia, toluene, xylene, and allergens.

ii.NASA (National Aeronautics and Space Administration) has placed Anthurium in the list of air purifier plants.

iii.The Anthurium flowers and plants are sold to local florists as well as in cities like Pune and Mumbai at an average price of rupees 60-75 per flower.

v.Vasini’s Bai interest in developing a new Anthurium variety was started from the year 1970 when her son brought 2 plants of Anthurium. In 1980, she manually cross-pollinated for the first time & after years of experiments in 1985, she developed the first variety of Anthurium- Dora (a single plant with 8-10 leaves and multiple flowers with orange-coloured spathe).

vii.The NIF-India facilitated validation trials of VasiniBai’s varieties along with 6 parent varieties under the varietal testing programme at Tamil Nadu Agricultural University, Coimbatore and the innovator’s varieties were reported to be healthy.

viii.NIF has also facilitated mass multiplication and large scale production of the 4 varieties: Dora, George, JV Pink and JV Red which have significant market value through tissue culture technique at Indian Institute of Horticultural Research (IIHR), Bangalore for diffusion of the varieties in similar agroclimatic zones of the country.

About National Innovation Foundation (NIF):
NIF is an autonomous body of the Department of Science and Technology (DST), Government of India (GOI). It was set up in February 2000 at Ahmedabad, Gujarat to provide institutional support for scouting, spawning, sustaining & scaling up the grassroots innovations across the country.
Chairperson– Dr. P. S. Goel.