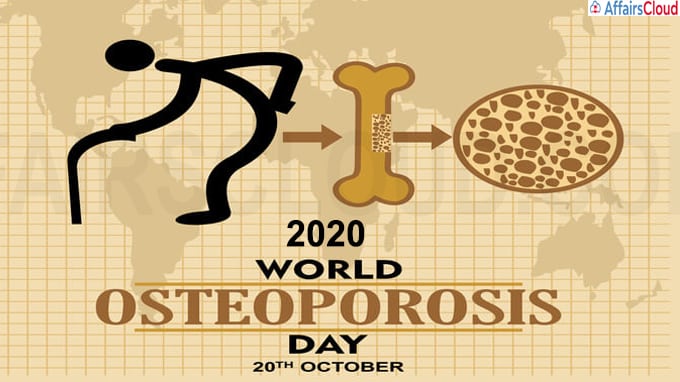 The World Osteoporosis Day(WOD) is annually observed across the globe on 20th October to raise awareness on the prevention, diagnosis and treatment of Osteoporosis. The day aims to make the prevention of Osteoporosis and fractures a global health priority by reaching out to healthcare professionals, patients, media and the general public.

The first WOD was celebrated on 20th October 1996.

The year-long campaign of WOD 2020 will feature “That’s Osteoporosis” as the headline, and highlight the visuals that impact the emotions and the stories of the Osteoporosis patients.

i.The National Osteoporosis Society of the United Kingdom launched the World Osteoporosis Day on 20th October 1996 with the support of the European Commission.

ii.The International Osteoporosis Foundation (IOF) has been organising the events of the WOD since 1996.

i.The campaign highlights the connection between osteoporosis and fracture which affects the daily lives of the patients.

ii.The campaign also focuses on Osteoporosis as a family affair where the family carries the burden of the patients as caregivers.

As a part of the WOD 2020 events the Department of Orthopaedics of the All India Institute of Medical Sciences(AIIMS), Nagpur organised a national webinar on “Fragility Fractures”.

Osteoporosis causes the bones to become weak and brittle where a mild stress could cause fracture.

i.Ageing, Hormonal change after menopause, Calcium deficiency, Vitamin D deficiency are some of the causes of Osteoporosis.

ii.Lack of physical activity and unhealthy food patterns can also affect the body fat and cholesterol level which can harm the bones.

Regular intake of balanced meals with calcium and proteins and regular exercise will help to prevent osteoporosis.