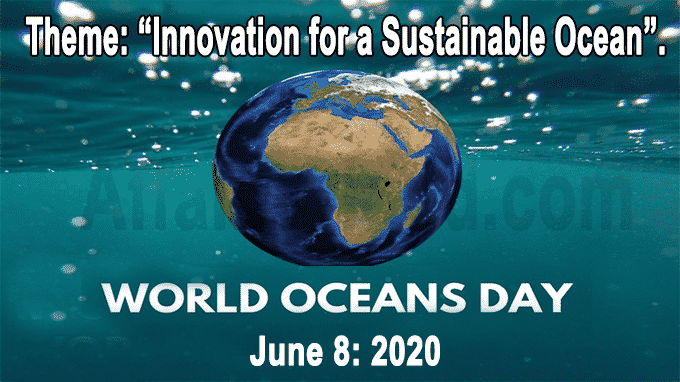 Every year on June 8 World oceans day, the United Nations(UN) day is celebrated across the world to  inform the public about the impact of human activities on the ocean, create a global citizens’ movement for the ocean, and mobilize & unite the world’s population for the sustainable management of the world’s oceans. The theme of 2020 is “Innovation for a Sustainable Ocean”.

i.Oceans face unprecedented stresses from factors ranging from pollution to climate change, these pressures are expected to rise in the future.

ii.There is a need to balance the preservation of a healthy ocean and ever-increasing economic activities that  require a fresh approach and rethinking in many areas.

iii.The theme is particularly related to the UN Decade of Ocean Science for Sustainable Development which will be happened From 2021 to 2030.

ii.More than 90% of trade using sea routes and as a source of jobs for millions of people

iii.Scientists have discovered around 200,000 marine species.