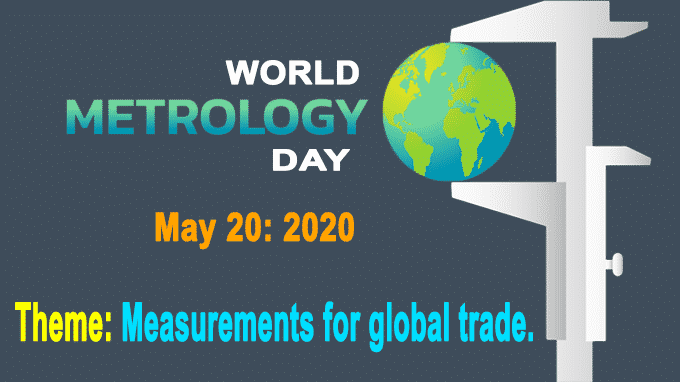 World Metrology Day (WMD) is celebrated every year on May 20, celebrating the International Systems of Units. The term Metrology is a study of measurements. On this day, many nations internationally collaborate to create awareness about metrology and its advancement in the respective field.

Theme for the year 2020: Measurements for global trade.

i.History of the day: The day commemorates the anniversary of signing the famous Metro Convention in the year 1875 in Paris, France, by representatives of 17 nations.

ii.The Convention set the framework for global collaboration in the science of measurement and in its industrial, commercial and societal applications.

iii.The original aim of the Metre Convention is the world-wide uniformity of measurement.

vi.Post the signing of the historic metre treaty in 1875 in France, the Bureau International des Poids et Mesures (BIPM) and The International Organization of Legal Metrology (OIML) were developed to make sure that National Metrology institutes across the globe work in a smooth manner for the advancing science of units or measurements.

vii.BIPM coordinates comparisons in measurements, whereas OIML formulates any sort of recommendations or suggestions about the same. OIML Certification System (OIML-CS) is also conducted systematically by the International Organization of Legal Metrology (OIML).

viii.On WMD, the significance of measurement of units is raised by various programmes, campaigns, workshops.