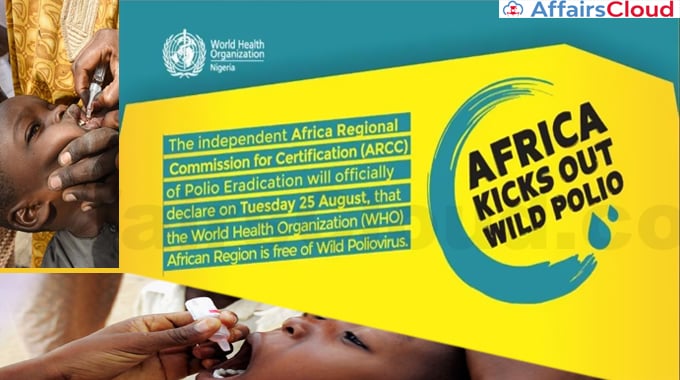 On August 25, 2020 the African Continent was declared free of wild polio by the independent body, the Africa Regional Certification Commission(ARCC), which is responsible for certifying the eradication of wild poliovirus in the World Health Organization (WHO) African Region.

i.The commission led by Professor Rose Gana Fomban Leke, chairperson of ARCC, certified that no cases had occurred on the continent for the past four years, which was one of the criteria for eradication of Wild Poliovirus.

ii.The Poliovirus is now found only in Afghanistan and Pakistan.

i.The last case of wild poliovirus in Africa was detected in 2016 in Nigeria’s Northeastern Borno state.

iii.Poliovirus has joined smallpox (1980) in the list of viruses that have been eradicated in Africa.

i.Each Country in the region has to meet criteria across polio immunization, disease surveillance and containment.

ii.The presence of a functional National Polio Certification Commissions (NCC) to review, endorse and submit documentation to the ARCC.

iii.A region is certified as wild polio free only after meeting all the criteria for certification and after three consecutive years without detection of any case in the country or the region.

Polio is a virus which spreads from person to person, usually through contaminated water. It attacks the spinal cord and causes irreversible paralysis in children usually under the age of five.

i.On May 22, 2020, Union Health Minister Dr Harsh Vardhan is set to take charge as the chairman of the World Health Organization (WHO) Executive Board at its 147th session.

ii.On May 29, 2020 the COVID-19 Technology Access Pool or C-TAP was launched by the World Health Organization (WHO) during an event co-hosted by WHO and Costa Rica at Geneva, Switzerland.