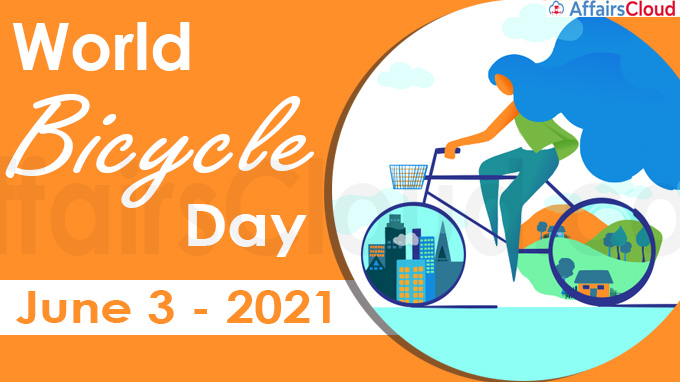 United Nations(UN)’s World Bicycle Day is annually observed across the globe on 3rd June to create awareness about the importance and benefits of riding bicycles.

The UN declared the 3rd June as World Bicycles day to highlight the benefits of cycling and to acknowledge the versatility, uniqueness and longevity of the two-wheeler

The UNGA has welcomed various initiatives to organise bicycle rides at the national and local levels to strengthen physical and mental health and well-being and the growing culture of cycling in society.

i.According to the World Health Organization (WHO), safe infrastructure for cycling and walking will support to achieve health equity.

ii.Cycling reduces the risks of heart disease, stroke, certain cancers, diabetes among others.

iii.Cycling and walking are the key part of the mobility solution to help the cities dissociate population growth from increased emissions.

The UN Sustainable Transport Conference will be held in October 2021 in Beijing, China with a focus on the role of sustainable transport towards the Sustainable Development Goals and the Paris Agreement on climate change.