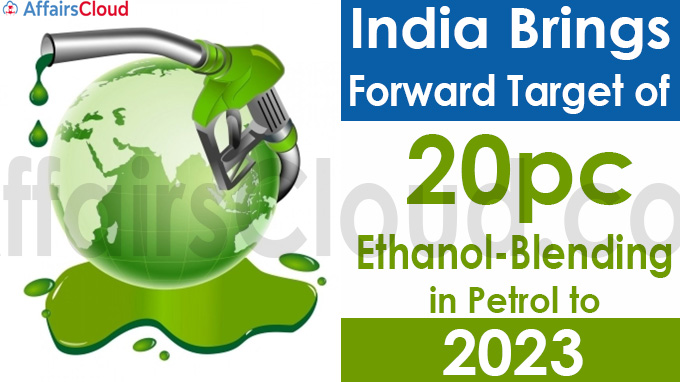 To reduce India’s dependence on costly oil imports, the government (govt) has brought forward the target year for achieving 20 percent ethanol-blending with petrol by 2 years to April 2023 from 2025. It was reported by the Ministry of Petroleum & Natural Gas (MoPNG).

ii.In January 2021, the govt brought forward the plan of achieving 20% ethanol-blending with gasoline by 2025 (5 years ahead of its previous target) and now it has been further advanced to April 2023.

Note – India is the 3rd biggest oil importer in the world and relies on foreign suppliers to meet more than 80 percent of demand.

i.Currently, the govt directs the oil companies in all states and UTs (union territories) to sell ethanol blended petrol with a percentage of ethanol up to 20 percent as per the Bureau of Indian Standards specifications.

ii.In April 2021, Ethanol-blending in Petrol in India reached more than 7.2 percent for the First Time. Click here to know more

i.In the current ethanol supply year, which started in October, 2020 India needs around 4 billion litres of ethanol to achieve a 10 percent ethanol-blending with gasoline and for the current target of 20 percent by 2023, 10 billion (1,000 crore) litres will be needed.

iii.The current move towards higher production and use of ethanol will reduce the exportable surplus of sugar, and will lead to higher international prices for the sweetener.

i.As the ethanol molecule contains oxygen, it allows the engine to more completely combust the fuel, resulting in fewer emissions and thereby reducing the occurrence of environmental pollution.

ii.The renewable ethanol content, a by-product of the sugar industry, will reduce the emission of carbon dioxide, carbon monoxide (CO) and hydrocarbons (HC).

Bihar Cabinet has approved the state’s own Ethanol policy called ‘Ethanol Production Promotion Policy, 2021’.  The approval has made Bihar as the 1st State in India to implement Ethanol Promotion Policy under the National Policy of Biofuels, 2018.