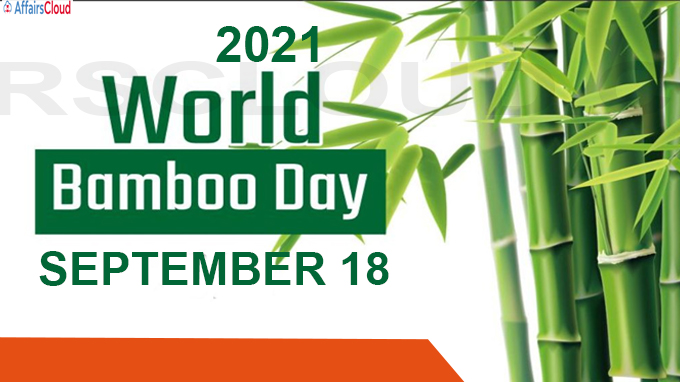 World Bamboo Day (WBD) is annually observed across the globe on September 18th to create awareness about Bamboo, a non-wood forest product, which is considered Green Gold.The day also aims to promote the new cultivation of bamboo for new industries across the globe and ensure the sustainable utilization of bamboo.

i.The World Bamboo day was initiated by Kamesh Salam from Assam, India, during his tenure as the President of the World Bamboo Organisation(WBO) from 2007 to 2009.

ii.In 2009, the WBO organised the VIII World Bamboo Congress in Bangkok with the support of the Royal Forest Department of Thailand.

i.Bamboo is native to Africa, Asia, South America, North America and Australia.China, the largest producer and exporter of bamboo, accounts for around 65% of the export of bamboo and rattan products, India contributes around 2% of the global supply.

ii.There are more than 35 million hectares of bamboo around the world.

i.The Indian Forest Act 1927 defined bamboo as a tree and prohibited cutting from outside forests and transporting it.

ii.Following the amendment of Section 2(7) of the Indian Forest Act 1927, bamboo is no longer a tree and felled bamboo too is not timber.