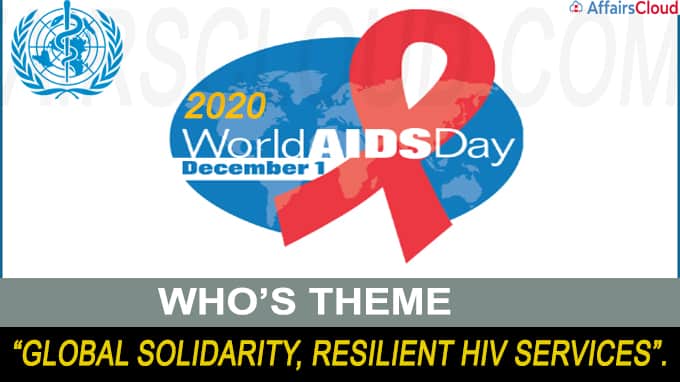 The World AIDS (Acquired ImmunoDeficiency syndrome) Day is annually observed across the globe on 1st December to show support to the people infected with HIV (Human Immunodeficiency Virus) and to remember the people who passed away due to AIDS and other related diseases. The first World AIDS Day was observed in 1988, which was the first international day for global health.

The World AIDS Day is one of the 9 days and 2 weeks that the member states of the World Health Organization(WHO) have mandated as “Official Global Public Health Days”.

According to the hiv.gov, the theme of 2020 World AIDS Day is “Ending the HIV/AIDS Epidemic: Resilience and Impact”

i.The idea of the World AIDS Day was initiated in 1987 by Thomas Netter and James W. Bann, public information officers for the AIDS Global Program of the World Health Organization Geneva, Switzerland.

i.HIV (Human Immunodeficiency Virus) directly affects the immune system of the infected person and destroys the cells of the body.

ii.AIDS is a medical syndrome which is caused by the HIV infection.

iii.HIV is transmitted from one person to another while AIDS cannot be transmitted.

i.HIV is transmitted from a pregnant woman to her children, the HIV can also be transmitted through breastfeeding by an infected mother.

ii.The virus can be transmitted by transfusing infected blood or infected needles.

i.As a part of the World AIDS Day 2020, WHO organises a webinar on the global efforts to ensure global solidarity and resilient HIV services, including during the COVID-19 pandemic.

iii. Prevailing against pandemics by putting people at the centre, UNAIDS is calling on countries to make far greater investments in global pandemic responses and to adopt a new set of bold, ambitious but achievable HIV targets. If those targets are met, the world will be back on track to ending AIDS as a public health threat by 2030.

iii.The data of the UNAIDS, a Joint UN Programme on HIV/AIDS showed the impacts of control measures, supply chain disruptions, lack of personal protective equipment, and the redeployment of healthcare workers on HIV services.

iv.In some countries, the Pediatric HIV treatment and viral load testing in children has fallen by 50 to 70% and due to the Lockdown due to COVID-19 pandemic, the new treatment initiation by 25 to 50% in April and May.

v.The Health facility deliveries and maternal treatment has also reduced by 20to60%, maternal HIV testing and antiretroviral therapy (ART) initiation reduced by 25 to 50 %, and infant testing services has reduced by around 10%.

ii.The Middle East and North Africa has recorded 81% and in Latin America and the Caribbean has covered 46% and West and Central Africa has covered 32%.

1 in every 5 people living with HIV infection are not aware of their infection and 1 in every 3 people under the treatment for HIV infection, mostly children and adolescents, experience disruption to supply of HIV treatment, testing and prevention.

ii.More than 690 000 people have died due to HIV-related diseases and around 1.7 million people were newly infected with HIV.

iii.The COVID-19 pandemic has affected the progress which implies that the 90-90-90 target for 2020 will be missed.