On May 9, 2020, The World Health Organization (WHO) and the United Nation (UN) postal agency released a commemorative postage stamp on the 40th  anniversary of the eradication of smallpox. Dr Tedros Adhanom Ghebreyesus, WHO Director-General, was the speaker on the occasion held in Geneva, Switzerland. 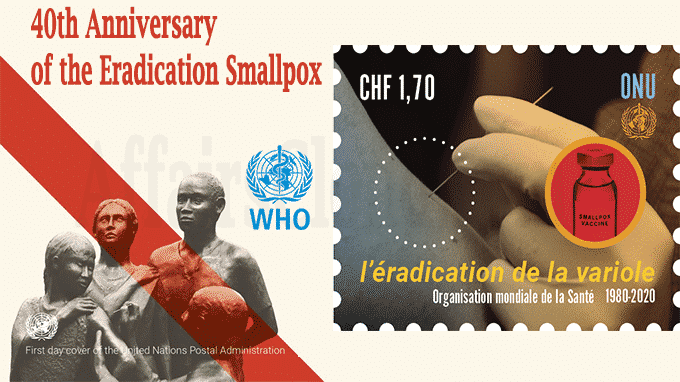 i.40th anniversary of the eradication of smallpox postage stamps: The commemorative stamp was designed and developed by Sergio Baradat, United Nations Postal Administration (UNPA) in collaboration with WHO.

ii.The stamp will be available for purchase at unstamps.org and it can be used to mail postcards and letters around the world, provided that they are sent from the UN headquarters in New York, Geneva or Vienna respectively.

iii.The stamp serves to honour the millions of people working together, from world leaders and international organizations to rural doctors and community health workers to eradicate smallpox.

iv.Tedros Adhanom expressed his gratitude to a top Indian-origin MrAtulKhare for making this commemorative stamp possible.

vi.Smallpox: Smallpox was the first and, to date, the only human disease to be eradicated globally. Until it was wiped out, smallpox had plagued humanity for at least 3,000 years, killing 300 million people in the 20th century alone.

vii.When WHO’s smallpox eradication campaign was launched in 1967, one of the ways countries raised awareness about smallpox was through postage stamps. In May 1980, the 33rd World Health Assembly issued its official declaration that “the world and all its peoples have won freedom from smallpox.”

viii.The total cost of the Smallpox Eradication Programme was estimated at 300 million USD (United States Dollar) and the saving to the global economy is estimated at 1billion USD a year.The smallpox stamp is in the denomination of CHF 1,70.

ix.Many of the basic public health tools that were used successfully to eradicate smallpox are the same tools that have been used to respond to Ebola and to COVID-19: disease surveillance, case finding, contact tracing and mass communication campaigns to inform affected populations.

About WHO:
The World Health Organization (WHO) is a specialized agency of the United Nations responsible for international public health.
Headquarters– Geneva, Switzerland.
Director-general– Dr Tedros Adhanom Ghebreyesus.