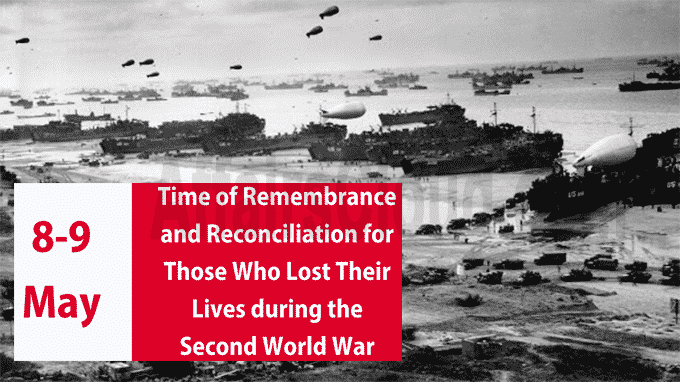 ii.The World War II was one of the most epic struggles for freedom and liberation in history and its cost was beyond calculation, beyond comprehension in which 40 million civilians died.

iii.On November 22, 2004, the United Nations (UN) General Assembly passed a resolution 59/26 and declared 8–9 May as a time of remembrance and reconciliation.

iv.However on March 2, 2010, the General Assembly passed a resolution 64/257,  by inviting all Member States, organizations of the United Nations system, non-governmental organizations and individuals to observe 8-9 May in an appropriate manner to pay tribute to all victims of the Second World War.

v.A special solemn meeting of the General Assembly in commemoration of all victims of the war was held in the second week of May 2010, marking the sixty-fifth anniversary of the end of the Second World War.

vi.Antonio Gutterres, UN Secretary General, also added that we must never forget the Holocaust and the other grave and horrendous crimes committed by the Nazis. The victory over fascism and tyranny in May 1945 marked the beginning of a new era.

vii.On this 75th  anniversary, let’s remember the lessons of 1945 and work together to end the COVID-19 pandemic and build a future of peace, safety and dignity for all.