The Inclusive Growth and Development Report 2015 report recognizes that inclusive growth is a complex and multidisciplinary process – to replace widespread poverty with ever increasing middle class prosperity, many conditions needs to be fulfilled.

India has been ranked very low, mostly in the bottom half, globally on most of the parameters for inclusive growth and development even as it fares much better internationally when it come to business and political ethics. India’s overall place in the Global Competitiveness Index 2014–2015 rankings is 71 out of 144 countries.

India has mostly been ranked in the bottom half of the 38 countries that make up our lower middle income bracket. Particularly disappointing is its position in terms of Fiscal Transfers, where it ranks 37th out of 38. It also ranks very low at 32nd for Tax Code and 36th for social protection.In the small business ownership category India was placed at the bottom (38th position).

The report defines Inclusive growth as “output growth that is sustained over decades, is broad-based across economic sectors, creates productive employment opportunities for a great majority of the country’s working age population, and reduces poverty.1 Inclusive growth is about both the pace and pattern of economic growth”

Six major findings from the data

The Inclusive growth and Development Report 2015 and India.

The report thumbs down India in the following areas

Scores good in the areas of

As an answer the report takes 140 indicators into consideration, to provide comparative illustration to the challenge of inclusive growth and development. These indicators measure 112 economies (countries) divided into 4 groups, across 7 pillars and 15 sub pillars.

Grouping of countries is based on similar levels of development (income) 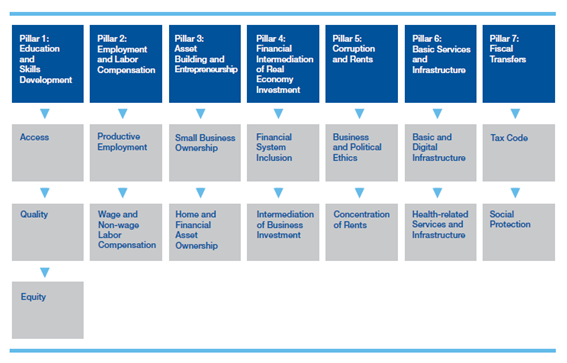