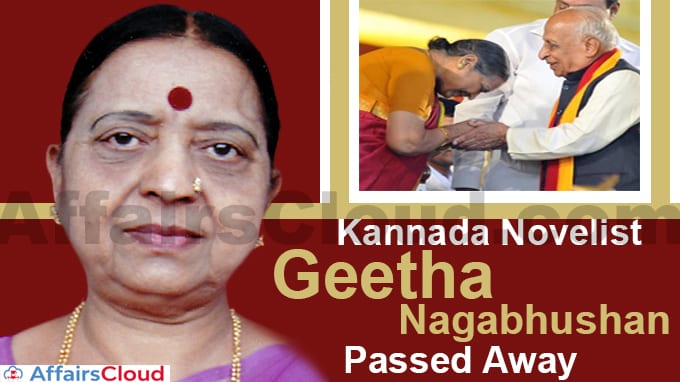 On 28th June 2020, Veteran Kannada Novelist Geetha Nagabhushan passed away at the age of 78 due to cardiac arrest in a private hospital at Kalaburagi. She was born on 25th March 1942 in Savalagi village, Kalaburagi.

i.She started as the Lecturer and retired as the Principal of Nagareshwar College in Kalaburagi.

ii.She served as the Chairperson of Karnataka Sahitya Academy

iv.She got an honorary doctorate from the Gulbarga University.

i.Most of her works challenged the patriarchal approach and discrimination against woman.

ii.She won the Kendra Sahitya Academy in 2004 for her novel “Baduku” and became the first Kannada woman to bag the award.

iii.She was the first woman to win Nadoja Awards of Kannada University Hampi in 2004.

iv.She won the Bhasha Parishat Award in 2012 from Kolkata.