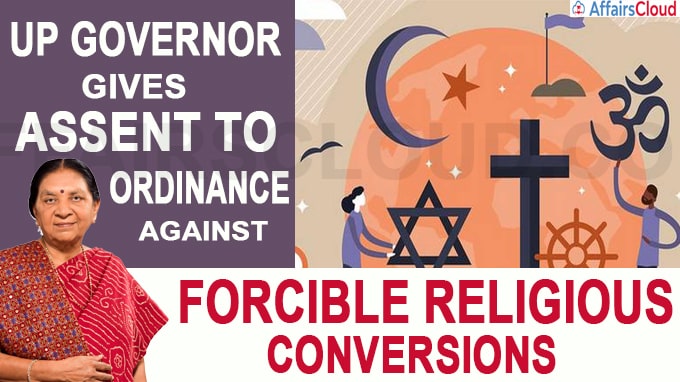 On November 24, 2020, Uttar Pradesh Cabinet gave its approval to the draft.

The main objective of the ordinance is to prohibit conversion of religion through misrepresentation, force, fraud, undue influence, coercion, allurement or marriage.

i.The ordinance states that a marriage will be declared “shunya” or null and void if the main intention of the marriage was to “change a girl’s religion”.

iii.Individuals who wish to change religion after marriage shall do it after applying to the district magistrate.

iv.If a minor, woman or person belonging to Scheduled Caste or Scheduled Tribes were converted through unlawful means, it could invite a jail term of minimum of 3 years and could be extended to 10 years with a fine of INR 25, 000.

v.The ordinance has called for strict action against mass conversions inviting a jail term of not less than 3 years and up to 10 years and a fine of INR 50, 000.

vi.In case of contravention of the law, the ordinance says that the court shall grant appropriate compensation payable by the accused to the victim of conversion which may extend to a maximum of Rs 5 lakh in addition to the fine.

vii.Notwithstanding anything contained in the Code of Criminal Procedure, 1973, all the offences under this ordinance shall be cognisable and non bailable and triable by the sessions court.

viii.In cases of mass religious conversion, the registration of the social organisations will be cancelled, and strong action will be initiated against them.

i.October 27, 2020 Uttar Pradesh has secured First Rank in Disbursing Loans under PM Street Vendor’s AtmaNirbhar Nidhi (PM SVANidhi) scheme by approving the highest number of loans under the scheme in the country.