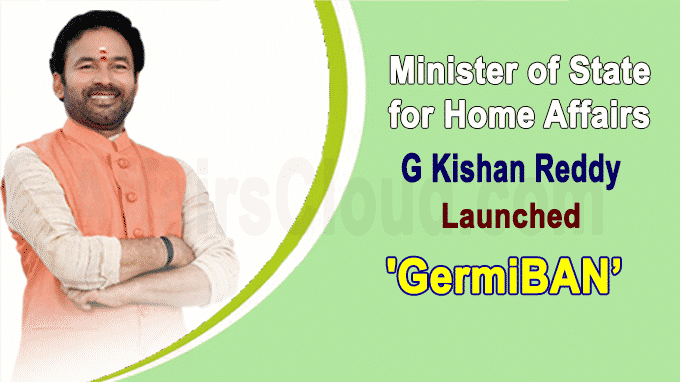 On June 14, 2020 Union Minister of State for Home Affairs G Kishan Reddy launched a device, ‘GermiBAN’ that kills viruses & other germs by sterilising, sanitising & disinfecting in large areas. It also acts as an Air Purifier effective against viruses like COVID-19 which will stop the spread of it.

The GermiBAN instrument was innovated by NEO Inventronix, hyderabad in their lab & was incubated at Atal Incubation Centre(AIC) Association of Lady Entrepreneurs of India(ALEAP)-Women Entrepreneurs(WE) Hub with the support of Atal InnovationMission(AIM), National Institution for Transforming India (​NITI) Aayog, Govt. of India(GoI). It was designed by GS Chakravarthy and GS Sirisha.

Features of the device:

i.The device will be useful for isolation wards, quarantine centres, hospitals and all general places.

iv.The device has Ultraviolet C(UVC) lights, Ionizer and Ozoniser & B, C, D components which will kill 99.9% of surface and air microorganisms.

i.It was set up with the support of AIM, NITI Aayog at ALEAP so as to create an innovative startup ecosystem to translate young women’s dreams into sustainable entrepreneurs.

ii.It is India’s first & only women entrepreneurs Industrial hub that has 169 entrepreneurs, in manufacturing sectors like Pharmaceuticals, Electronics among others