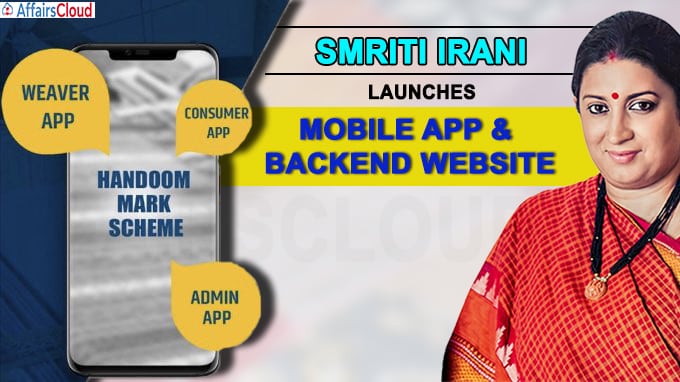 The Union Minister of Textiles and Women & Child Development, Smt Smriti Zubin Irani, launched the Mobile App & Backend Website for Handloom Mark Scheme (HLM) for the weavers on the occasion of 6th National Handloom Day held virtually on 7th August, 2020, organized by the Ministry of Textiles, GoI (Government of India).

Note: Union Minister of Textiles and Women & Child Development, Smriti Zubin Irani served as the Chief Guest and Secretary of Textiles, Shri Ravi Capoor was the Guest of Honour and Development Commissioner (Handlooms) Shri Sanjay Rastogi was also present for the function.

The Union Government of India had declared 7th August as the first National Handloom Day in July 2015, 110 years after the Swadeshi Movement, launched on August 7, 1905.

About the Mobile app:

i.It was developed by the Textile Committee of Mumbai to digitalize the process of Registration

ii.The App has 10 Indian languages and English language which enables the weavers to apply for Handloom Mark registration easily.

iii.This app confirms the originality of the product through QR code (Quick response code) labels affixed on each handloom product.

-launched the “My Handloom” portal for individual weavers

The Union Minister of Textiles and Women & Child Development, Smt Smriti Zubin Irani launched a website portal, ‘My Handloom’ for the individual weavers and organization on the occasion of the 6th National Handloom Day on 7th August, 2020, virtually.

About the portal My Handloom

i.Various benefits under the handloom schemes like Block Level Clusters, Handloom Marketing Assistance and Awards can be applied through the portal. The portal will be linked to the e-office and DBT portal.

ii.The portal with a single “sign-in” acts as One-stop shop for information on all handloom schemes.

iv.An Online Lottery System for the allotment of stalls for various events such as melas, Dilli Haats, etc. has been introduced.

i.“India Handloom” brand was launched by the Prime minister, Shri Narendra Modi, GoI in 2015 on the occasion of the 1st National Handloom Day.

ii.Upto 1590 products have been registered under this brand, which has more than 180 product categories.

During the event a virtual fair and a social media campaign has been inaugurated:

i.A presentation was made on Craft Handloom Village, Kullu, being established in association with District Administration, Kullu.

ii.The Chief Minister of Himachal Pradesh, Shri Jai Ram Thakur marked that a scheme One District- One Product will be established to unite the districts and products to set their identity.

i.The Ministry of Textiles has taken steps to on-board weavers and their producers on Government e-Marketplace (GeM) to supply their products to the Central Govt. Departments.

ii.Many Producers Companies will be set across the country in the handloom sector to extend the benefits of various handloom schemes to the weavers and workers.

i.In order to aware people about the norms to contain the spread of Covid-19 in “Unlock” phase, NITI Aayog in partnership with Bill and Melinda Gates Foundation (BMGF), Centre for Social and Behavioural Change (CSBC) of Ashoka University, Ministry of Health and Family Welfare (MoHFW), and Ministry of Women and Child Development (WCD) launched the behaviour change campaign ‘Navigating the New Normal’ and its website.