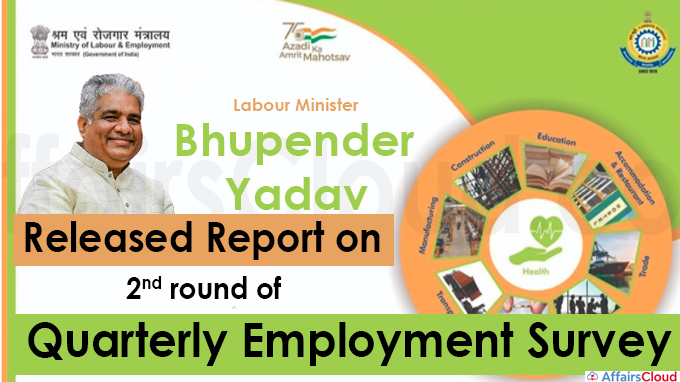 The QES of Q2FY22 had a reference date of 1st July, 2021. Data were collected through field visits from 11,503 establishments, out of the 12,038 establishments selected in the sample.

It provides quarterly updates about the employment and related variables of establishments in both organized and unorganized segments of 9 non-farm sectors. These are Manufacturing, Construction, Trade, Transport, Education, Health, Accommodation & Restaurant, IT (Information Technology)/BPO (Business Process Outsourcing) and Financial Services.

i.The total employment for these nine sectors taken collectively was reported as 2.37 crore in the sixth EC (2013-14).

ii.Of the total employment estimated, Manufacturing accounted for nearly 39%, Education with 22%, Health and IT/BPOs sectors are around 10%, Trade (5.3%) and Transport (4.6%).

iii.Nearly 90% of the establishments have been estimated to work with less than 100 workers.

iv.Regular workers constitute 87% of the estimated workforce in the nine selected sectors, with only 2% being casual workers.

v.98.3% of the establishments were located outside households.

vii.16.8% of the establishments provided formal skill development programmes, although mostly for their own employees.

viii.Approx 5.6% of the establishments were having vacancies. The estimated number of total vacancies was 4.3 lakhs.

ix.28.4% of those working in seven of the nine sectors (excluding Education and Health) were matriculates/secondary or less educated, while another 37.0% were graduates or had higher qualifications.

iv.All India Survey of Employment Generated in the Transport Sector

About Ministry of Labour & Employment (MoL&E):