The United Nations Educational, Scientific and Cultural Organization(UNESCO), a specialized agency of the United Nations based in Paris, France has joined hands with Rajasthan state government to further enhance music, art and craft forms, and other intangible cultural heritage of the state. 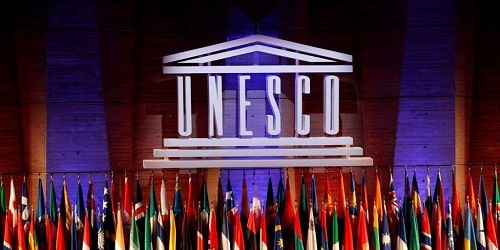 Key points:
i. MoU signed: For this, An MoU (Memorandum of Understanding) was signed for the first time between Eric Falt, Director, UNESCO Office in New Delhi and Rajasthan’s Minister of Tourism Vishvendra Singh in Jaipur, Rajasthan at an event held at Paryatan Bhawan with the aim to revive traditional cultural heritage and improve livelihoods.
ii. 10 new cultural hubs:  According to the MoU, now UNESCO with an NGO, Contact Base will build a special tourist circuit in Jodhpur, Bikaner, Barmer and Jaisalmer for around three-and-a-half years. Under this, 10 new cultural hubs will be developed, which help promote various types of cultural heritage through hosting of events, performances, and sale of handicrafts.
iii.Focus:  In order to create community-led and community-benefitting tourism opportunities, the project will focus on rich intangible cultural heritage and traditions, such as pottery, weaving music traditions, and other crafts.
iv. The UNESCO in July 2019 has added the ‘Pink City’ Jaipur/Walled City of Jaipur of Rajasthan, known for its iconic architectural legacy, into the list of the World Heritage Sites. Rajasthan, a special state among tourists, is home to 3 UNESCO World Heritage sites.
v. The Rajasthan project is based on a successfully developed model in the state of West Bengal by UNESCO and contact base over the last 6 years. It has “renovated 22 different art forms, offered clear economic benefits to 15,000 artists and households and converted 18 marginalized villages into vibrant cultural destinations in some of the districts of West Bengal.

About UNESCO:
Formation: 4 November 1946
Director-General: Audrey Azoulay
It has 193 member states and 11 associate members & pursues its objectives through 5 major programs such as education, natural sciences, social/human sciences, culture and communication/information.