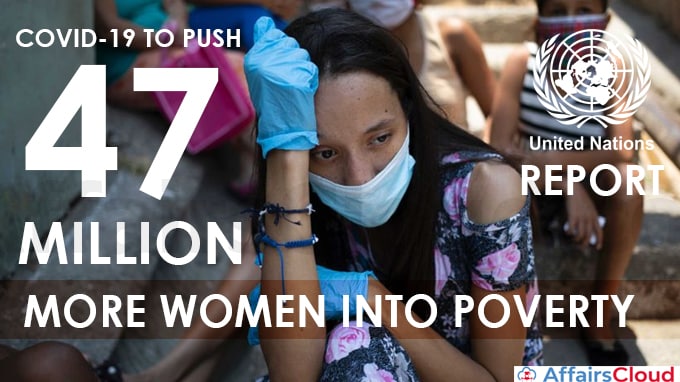 On 2nd September 2020, The United Nations(UN) Women and United Nations Development Programme(UNDP) released new data which states that the COVID-19 pandemic will have negative impacts on the women and will increase the poverty rate of women and widen the gap between men and women in poverty.

The summarised data is published as a report titled “From Insights to Actions: Gender Equality in the wake of COVID-19” by the UN Women.

i.The pandemic is expected to reverse the progress made to eradicate poverty by the end of this decade and push around 96 million people into extreme poverty by 2021 of which around 47 million will be women and girls.

ii.The projections accounts only the downward revision of the gross domestic products(GDP) and does not accounts the factors like, women leaving work for childcare and other responsibilities, which will affect the sex distribution of the poverty.

iii.International Labour Organisation (ILO) estimates that by June 2020, around 72% of the domestic workers had lost their jobs due to COVID-19.

The study estimates that it would take around 0.14% of Global GDP (around 2 trillion USD) to lift the world out of poverty by 2030 and around 48 billion USD to bridge the gender poverty gap.

The pre pandemic projections of the South Asian region stated around 15.8% of world poor women and girls will be living in South Asia, and the revised projects states that it would be around 18.6 %.

Government should implement strategies focused on improving access to education and family planning, gender equality and expanding social transfers could get more than 100 million women out of poverty.

ii.World Bank in its April 2020 Economic Update for East Asia and Pacific (EAP) titled “East Asia and Pacific in the Time of COVID-19′′has stated that if the economic situation become worsen further due to COVID- 19 consequences then the poverty is estimated to increase by about 11 million people in the EAP region.