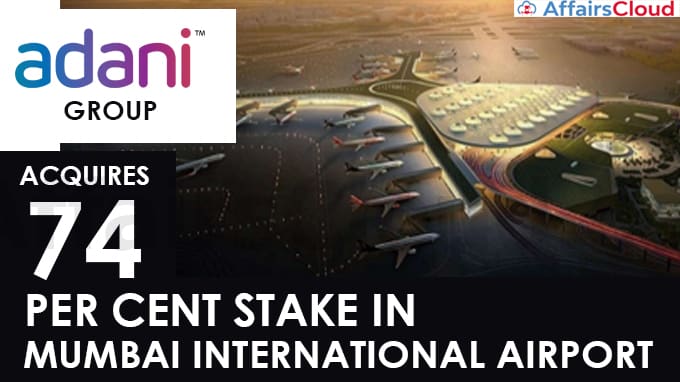 Adani Airport Holdings Limited(AAHL), holding company of Adani Group for its airports business (and a subsidiary of Adani Enterprises Limited-“AEL”:collectively called “Adani”) has entered into an agreement to acquire 74% in Mumbai International Airport Limited(MIAL) or Chhatrapati Shivaji Maharaj International Airport. Through the agreement, AAHL will acquire the debt of current promoter GVK group and buy out minority shareholders.

Important Points about the Acquisition

i.MIAL is a joint venture(JV) between the Airports Authority of India(AAI) and GVK Industries. Airport Company of South Africa (ACSA) holds 10% and Bidvest Group holds 13.5% in MIAL.

ii.It indicates that AAHL will acquire 50.50% stake of GVK Airport Developers Ltd(GVKADL) and 23.5% of minority partners ACSA and Bidvest in MIAL – for which it has obtained Competition Commission of India approval. Remaining 26% stake of MIAL will be with acquired by AAI.

Provisions of the Agreement

i.In order to commence construction of Navi Mumbai International Airport, Adani will achieve the financial closure of this project at the earliest.

ii.Adani is subjected to obtain necessary regulatory approvals, to convert the acquired debt to equity of GVKADL on mutually agreed terms

iii.It is charged for causing a loss of Rs 310 crore to the exchequer as it entered into fake work contracts on the land given by the government to MIAL.

ii.L&T Technology Services(LTTS), the engineering services arm of Larsen and Toubro Group, informed that it will acquire a 100 % stake in Texas-based Orchestra Technology(Tech). The acquisition is an all cash deal of USD 25 million, or about Rs 187 crores.