The West Bengal government has won the prestigious United Nations (UN) Public Service Award for the ‘Kanyashree Prakalpa’ initiative aimed to combat child marriage and ensure education to the girl child in the state.

“Kanyashree Prakalpa” is a targeted conditional cash transfer scheme aimed at retaining girls in schools and other educational and skill development institutions and preventing child marriage. 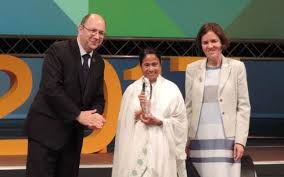 The UN Public Service Awards are given to institutions from across the world for their innovation and excellence in providing public services.