Union of European Football Associations named Theodore Theodoridis as interim general secretary, this decision is taken at the Executive committee meeting at their headquarters in Nyon, Switzerland. 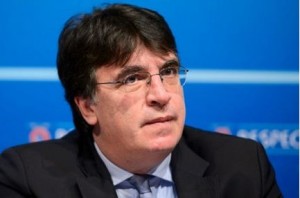 Theodoridis joined UEFA in 2008 and has been in charge of relations with European Associations.