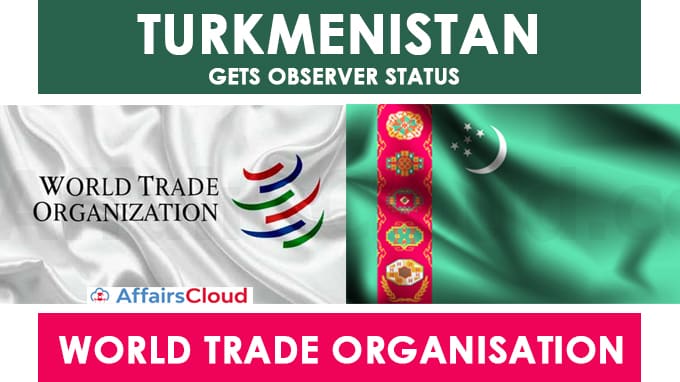 On July 22, 2020, Turkmenistan became the 25th country who was granted observer status in the World Trade Organization (WTO) enabling the nation to establish permanent residence at WTO headquarter in Geneva, Switzerland and monitor it’s proceedings. Turkmenistan also became the last former Soviet republic to establish formal ties with the trade body. This observer status was granted during the 5th virtual session of WTO General Council which was held from WTO headquarters and attended by representatives of its member-states.

-Turkmenistan, a Central Asian country filed a request for observer status in May, 2020 and expressed willingness to initiate talks on accession to the WTO within five years.

-Its neighbouring Central Asian countries — Kazakhstan, Kyrgyz Republic, Tajikistan and Afghanistan — have acceded to the WTO, while Uzbekistan has been in on-and-off negotiations on WTO accession since 1994.