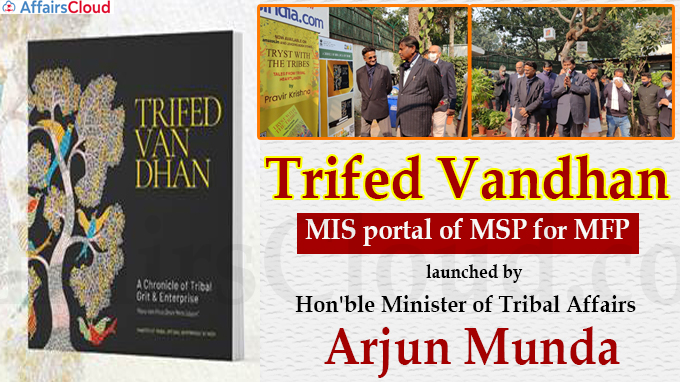 ii.The TRIFED Van Dhan Chronicle documents the work done for the promotion of tribal enterprises in the country and the achievements of tribal entrepreneurs under the Van Dhan Vikas Yojana.

c.MIS Portal on MSP for MFPs:

i.The MIS Portal for ‘MSP for MFPs’ was launched as the dashboard for the authorised users of the Ministry of Tribal Affairs and TRIFED.

ii.The dashboard contains the data pertaining to the list of procurement centres and their locations and the procurement of MFPs being done across the country.

iii.The portal is being launched to ensure ready and online availability of procurement-related data for analysis and fast and effective decision making and will ensure transparency in the procurement activities and performance and efficiency of the different states and districts.

ii.A central scheme titled ‘Formation and Promotion of 10,000 Farmer Producer Organizations (FPOs)’ was launched to ensure economies of scale for farmers over the next 5 years.

iii.TRIFED has been made the implementing agency by the Ministry of Agriculture to undertake the formation of 14 Honey FPOs alongside NAFED and NDDB in the states of Chhattisgarh, Himachal Pradesh, Uttarakhand, Tamil Nadu, Karnataka, Andhra Pradesh, Odisha and Gujarat.

Note – Beekeeping activity has been recognized as one of the important activities by Govt of India for its promotion and development to achieve ‘Sweet Revolution’ to enhance income of farmers.

i.UNICEF and TRIFED have signed an MoU to launch ‘Tribal Samvaad network’ – Tribal network for Social and Behaviour Change (A people-to-people ‘prosperity’ platform built on the emergent digital, social, alternate and mobile revolution).

f.Research Report in collaboration with JD Center of Arts on Tribal Livelihood of Odisha:

i.Arjun Munda has unveiled a report titled, ‘Tribal Livelihoods: From Sustenance to Sustainability’, which highlights the creative capabilities of tribal groups and their interconnectedness with the surrounding environment.

ii.TRIFED in collaboration with JD Centre of Arts undertook a socio-cultural research work and anthropological study of tribal art and tradition in Mayurbhanj, Keonjhar, Sundergarh, Koraput and Rayagada districts of Odisha.

About Ministry of Tribal Affairs: