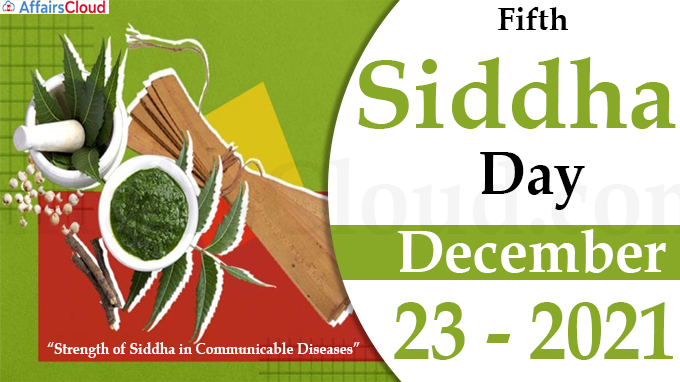 Siddha day is annually observed across India on 23rd December to create awareness about the Siddha system of medicine. The day is annually organised by the Ministry of Ayurveda, Yoga, Naturopathy, Unani, Siddha, Sowa-Rigpa and Homoeopathy(AYUSH) on the eve of the birthday of Siddhar Agathiyar, which falls during the Ayilyam star in the Tamil month of Margazhi.

The theme of the 5th Siddha Day is “Strength of Siddha in Communicable Diseases”, which sensitises the public on the importance of the Siddha system in tackling communicable diseases.

The first-ever National Siddha Day was observed on 4th January 2018.

i.According to the Tamil tradition, there are 18 Siddhars, who are considered as the pillars of Siddha medicine.

ii.Agathiyar is the first Siddhar and he is considered as the ‘Father of Tamil literature.

iii.He compiled the first Tamil grammar which is called ‘Agathiyam’.

v.One of his major contributions includes the martial art of Kalari which emphasis on unarmed combat and Varmam techniques; that includes Varma therapy, Kalari healing procedures and Silambam.

ii.The celebration of the 5th edition of Siddha Day was jointly organised by the Central Council for Research in Siddha(CCRS), National Institute of Siddha(NIS), Tambaram Sanatorium, Chennai and the Directorate of Indian Medicine & Homeopathy, Government of Tamil Nadu.