On the occasion of International Day of Zero Tolerance for Female Genital Mutilation (On February 6, 2020), the United Nations’s (UN) health agency, the WHO (World Health Organization) has presented the interactive modelling tool.
As per this tool, Female Genital Mutilation (FGM) poses a serious threat to women’s health & to avoid its ill effects, a burden of  $1.4 billion is incurred worldwide. 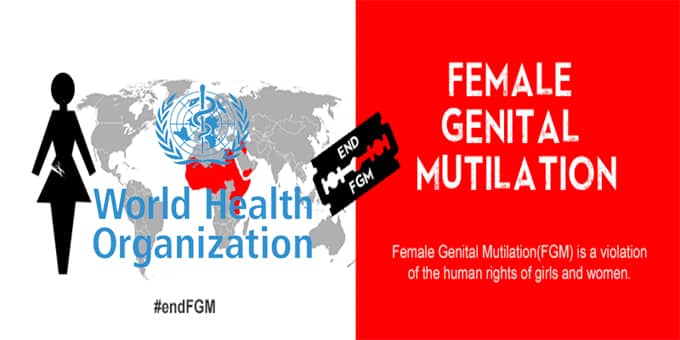 i.As per WHO, every year more than 200 million women and girls have to face FGM. This is usually done between birth and 15 years old and has a profound effect on their health, including infection, bleeding or psychological trauma to chronic health conditions.This can lead to such incurable disease, which has to bear the burden throughout life.

ii.Terrible abuse of human rights: According to statistics, many countries spend about 10 % of their total health expenditure on treatment of female genital mutilation every year. In some Central Asia or African countries, this figure is up to 30 %.

iii.Egypt banned FGM in 2008: According to UNICEF(United Nations  Children’s Fund) , Egypt has banned FGM in 2008, but it is still practiced there and in Sudan. About one-fourth of the victims / about 5.2 crore women and girls do not get health care.

v.About Female genital mutilation (FGM):It consists all procedures that involve partial or total removal of the external female genitalia, or other injury to the female genital organs for non-medical reasons.