The Ministry of Tourism submitted its report on foreign tourist visits to India in 2018 to the parliament. As per the report, Bangladesh topped the list for having maximum no. of the country’s visitors to India. Bangladesh was followed by United States(US) and United Kingdom(UK) in the second and third place respectively. 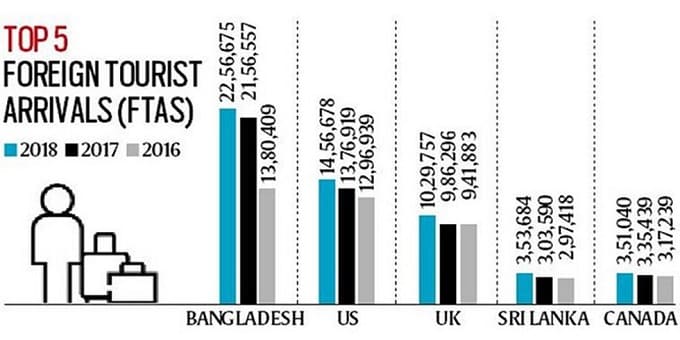 i.Among individual state visits, TamilNadu(TN) topped the list with for having the maximum number of tourist arrivals. In 2018, TN had 60 lakh foreign visitors.

ii.TN was followed by Maharashtra and Uttar Pradesh(UP) with 50lakh and 37 lakh foreign visitors respectively.

i.The report showed a consistent increase in the overall foreign tourist arrivals to India as well as foreign Exchange Earnings(FEE) over the years from 2016- 18.