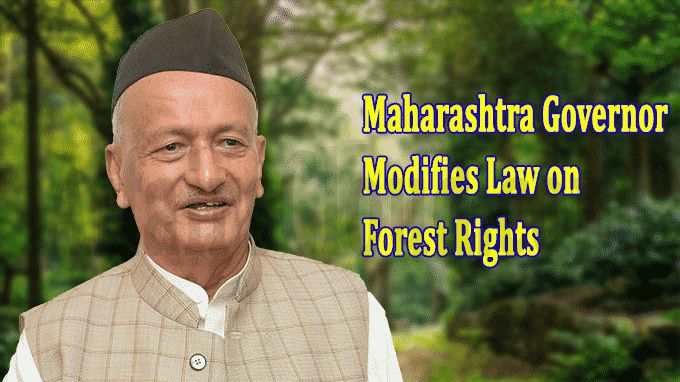 The notification issued on May 18, 2020, stated that the Governor of Maharashtra Bhagat Singh Koshyari has made certain modifications in Section 6 of the Scheduled Tribes and Other Traditional Forest Dwellers (Recognition of Forest Rights) Act, 2006, (also called as Forest Rights Act-FRA) in its application to the Scheduled Areas of the State of Maharashtra, by exercising the powers conferred upon him by Schedule V of the Constitution.

Major Highlights of the notification

i.The notification applies in the Panchayats (Extension to Scheduled Areas) Act, 1996 (PESA) areas in the State of Maharashtra and allows appeal provision against the decisions of the DLC

ii.It states that the DLC under the chairmanship of Divisional Commissioners has been constituted to hear the appeals against the decision of the DLC

iii.Cases if order passed by DLC  before & after the commencement of the notification

i.A large number of applications under the act relating to record of rights are rejected by the DLC under the  Act. However, there was no provision in the Act for appeal against the decision of DLC. To benefit thousands of tribals, this notification was issued.

ii.As per the data revealed by the tribal ministry a total of 18,89,835 titles have been granted & 72,23,132 hectares(72,000 sqkm) of public forest land has been granted & converted to individual and community ownership across the country.