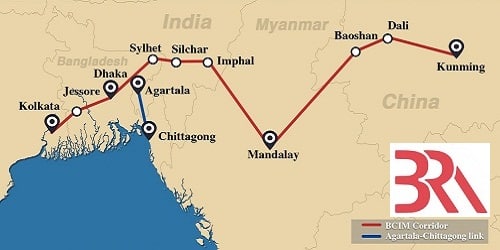 i. The BRI is a major initiative speared by China to reconstruct the ancient Silk Road connectivity across Eurasia and Africa.
ii. This has come to limelight after a document attached with the Joint Communique of the Leaders’ Roundtable of the BRF that concluded in Beijing, the website did not list the BCIM as a project under the BRI.
iii. South Asia is covered by 3 main undertakings, namely:

iv. For the 2nd time, India did not participate in the BRF since the CPEC passes through Pakistan occupied Kashmir (PoK).
v. The BCIM corridor ranging 2800 km would provide linkage between Kunming in China’s Yunnan province and Kolkata after passing though areas, namely, Mandalay (in Central Myanmar) and Dhaka  before proceeding to Kolkata.
vi. The BRI had got a high octane boost when Myanmar partnered with China to establish the CMEC, in September 2018.
vii. The CMEC will run from Yunnan Province of China to Mandalay to Yangon (this was previously Myanmar’s capital) before ending its path at the Kyaukpyu Special Economic Zone (SEZ) in the Bay of Bengal. The CMEC will possibly decrease Beijing’s trade and energy reliance on the Malacca straits (Malacca straits links the Indian Ocean with the Pacific Ocean), thus threatening one of China’s major economic lifelines.
viii. In August 2018, the Industrial and Commercial Bank of China (ICBC) opened a new centre in Yangon and helped in the funding of some of the CMEC driven projects.